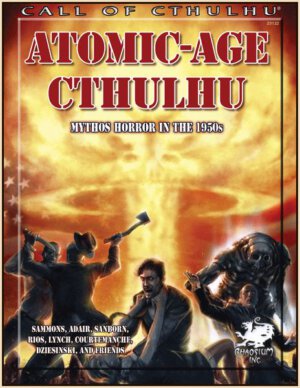 The latest Call of Cthulhu supplement has arrived from Chaosium and the focus this time around is America of the 1950s. Personally, I believe there are few eras in U.S. history which would be better suited for gaming rising paranoia and a creeping sense of horror – in a roleplaying environment – than the Eisenhower period. From the House Committee on Un-American Activities to the threat of nuclear annihilation to the war (which wasn’t called a war) in Korea, there’s a lot to mine in order to spin tales which will keep players on the edge of their seats. Very few times in this country’s history have things looked so pretty and pristine to the outside eye while rot and decay lay below the surface.

Does Atomic-Age Cthulhu bring forth enough from this goldmine to make it worth a purchase? Let’s find out… 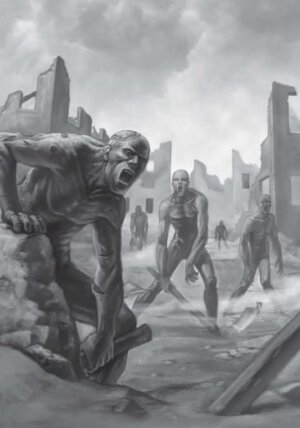 Clocking in at 223 pages you’ll find a great majority of the book is devoted to seven standalone adventures touching upon various memes of the 1950s such as the rise of television, the space race, the Korean conflict, rock n’ roll and more. Where Atomic-Age Cthulhu is light is in the presentation of background about the period in which the adventures take place; only 28 pages cover America of the 1950s and, while containing plenty of quick hit factoids, no specific topic receives more than a few paragraphs. Although some may pick up the supplement thinking it’s a sourcebook, truth is it’s really all about the adventures.

The Village was Made for Us – A small Washington state town devoted to atomic research is the center piece of a potential mythos related alien invasion. When a government worker commits suicide, the investigators are drawn in to find if the deceased may have been a traitor or possibly involved in something much more sinister.

TV Casualties – That newfangled television lies at the center of this tale and those who claim TV will be the undoing of civilization may be closer to the truth than they think. Dontcha know TV will rot your brain?

The Return of Old Reliable – An homage to the plethora of “B” movie mutants who threatened humanity’s existence. Here we have a mash up of Nazi scientists, the space race, and experimentation gone wrong.

Forgotten Wars – The action moves to Korea as the players take on the roles of a tank crew tossed into the middle of a much older conflict with more than global ideologies at stake. As if the horrors of war weren’t enough?

High Octane – Hot Rods, Commies, and Hells Angels offer plenty of challenges for the investigators even before the big baddies are introduced. This adventure practically overflows with 1950s themes. 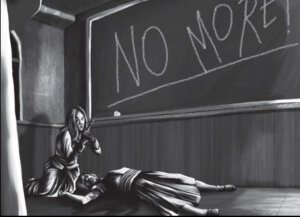 L.A. Diabolical – When would a Satanic church, and its leader, be the least of your worries? No doubt, when your investigators are faced with an ancient evil at odds with the bogus cult.

Destroying Paradise, Hawai’ian Style – An Elvis-like central character is off to the islands to shoot a movie as Hawaii steady moves toward statehood. The players are tasked with much more than keeping a film shoot on schedule as a multitude of forces are on a collision course which will lead to the destruction of all life on the islands. Blue Hawaii indeed!

As well as the aforementioned adventures, there are plenty of seeds provided for a clever Keeper to develop into more scenarios down the line. A few pages are aIso devoted to some new character types as well as era appropriate skills. I previously mentioned Atomic-Age Cthulhu is an adventure book rather than a title looking to be a source for all things 1950s in the U.S. of A. and that’s one of the things which leaves me a bit up in the air about how I feel about the supplement. While there’s interesting tidbits of background flavor. there isn’t a whole lot someone with a passing knowledge of the period won’t already find themselves familiar. On the flip side, the adventures are interesting and though none of them are standouts there isn’t a major flop in the bunch either although just tossing in Mythos races or beings doesn’t necessarily make for a Lovecraftian adventure. Also a couple of the stories are sort of rehashes of previously published adventures so they don’t come across as particularly fresh. 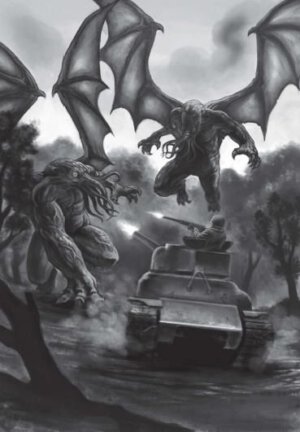 I like to keep discussion of RPG adventures in my reviews spoiler free so Keepers don’t have to worry about players in their campaigns getting overly clued into what they might be tackling. That said something which sticks out about some of the adventures included in Atomic-Age Cthulhu don’t really fit into the time period in question; L.A. Diabolical and Destroying Paradise, Hawai’ian Style deal with themes and social mores better found in a 1960s or early 1970s setting. Even some of the historical events mimicked in the stories come from a later time frame: the rise of shyster satanic worship in Hollywood (and the general public) as well as rock ‘n roll beach movies. One gets the sense of a square peg being driven through a round hole to place these adventures into a Cthulhu book devoted to the ‘50s.

Pointing these things out isn’t to say Atomic-Age Cthulhu isn’t worth a purchase. I’ve publicly said many times my favorite RPG has always been Call of Cthulhu and I spent nearly two decades running the game. I’ve seen releases which were must haves for any CofC Keeper as well as some which were merely serviceable as inspirations to tear apart and rebuild to better suit a particular play style. Unfortunately, there’d also been a few books which completely missed the mark of providing a Lovecraftian brand of horror in my opinion. I feel Atomic-Age Cthulhu falls more into the middle category of supplements; it’s alright but simply not great.

I’ve seen releases which were must haves for any CofC Keeper as well as some which were merely serviceable as inspirations to tear apart and rebuild to better suit a particular play style. Unfortunately, there’d also been a few books which completely missed the mark of providing a Lovecraftian brand of horror in my opinion. I feel Atomic-Age Cthulhu falls more into the middle category of supplements; it’s alright but simply not great.