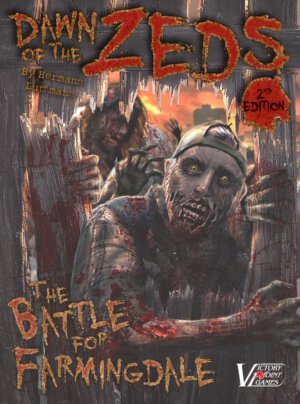 Check out the original review here and listen to the audio review of the second edition here.

I’ll begin with the preface designer Hermann Luttmann is a good pal, as are many of the folks involved with Victory Point Games, and I’ve been a supporter of the game company for quite some time. I know some people in the past felt I cut the company too much slack when it came to their titles before VPG upped the ante as far as component quality. Personally, I’m not much of a component snob so if a game is really good I’m not overly concerned with the pieces which make up the game, unless they’re truly bad or won’t hold up to repeated play. The original Dawn of the Zeds is a big favorite of mine, and was my choice for Game of the Year for 2011, so I was really looking forward to all the new goodies to be included in the revamped second edition.

The overall take for the new edition of DotZ seems to be more, more, more! There are plenty of additional heroes, allied units, dastardly villains, special zombies, Event and Fate cards, and even more ways to play. The actual gameplay of DotZ hasn’t changed too much so, if you have the original release, jumping into the action this time around is a snap. 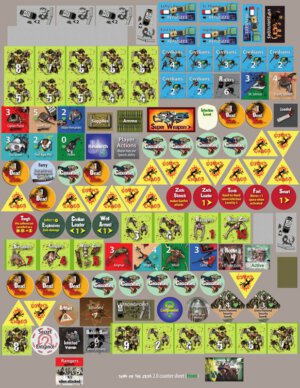 If you have the original Dawn of the Zeds, the first thing to catch your eye is the top notch components and presentation for the 2013 title. The counters are nice and thick and the laser cutting process allows for some interesting markers such as a skull marking the Infection Level as well as little barricades you actually put together so they stand up on the map. The rulebook is chock full of examples of play and laid out in a manner which is pretty easy to follow for the most part. Granted there are a few specific items such as the additional allies and villains, which can come into play, requiring a flip through the book to track down but once you’ve tackled them once or twice you’ll remember the info from there on out.

Dawn of the Zeds is part of VPG’s States of Siege line and follows the format of those titles where you’re placed in an “against all odds” situation which makes surviving – let alone winning – a challenging proposition. In DotZ you’re tasked with preventing the multitude of zombies (or “Zeds”), who are approaching along various avenues, from reaching the center of the town of Farmingdale. The game is card driven and Events (good, bad, and nearly disastrous) occur to not only provide challenges to overcome but also add a narrative flow to the proceedings. The meat and potatoes of the title are nearly identical to the previous edition so I’ll avoid rehashing all the details since you can easily check out the previous review.

Suffice to say the Zeds are approaching the center of Farmingdale by way of tracks and their movement is determined by the Event cards you’ll draw. These Event cards also tell you if Refugees, Raiders, or Army Rangers (if any are in play) move, if your survivors consume supplies, if a new unit of zombies show up due to an outbreak based on the Infection Level, as well as an event which takes place and where in the sequence it occurs. Finally you find how many actions you’ll have available that turn. Everything on the card will happen before you get to use your actions in response.

As I’ve said many times about the States of Siege games, you’ll never have enough Actions to tackle all that needs taking care of so you have to utilize those Actions wisely. You can attack the Zeds, scavenge for supplies and ammo, build barricades, heal heroes and civilians, search for a cure, move your survivors around the map, and more. Ranged combat is crucial because not only can’t the Zeds fight back but you also don’t have to pump up the Infection Level because you got stuck in with hand to hand combat. 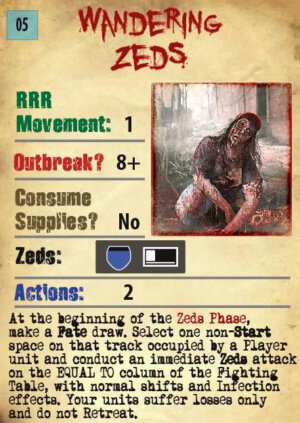 There’s been an increase in the number of Event and Fate cards in the second edition and just about anything you’ve run across in zombie movies, books, TV shows, and comics is represented in these cards. You can play a short, standard, or campaign game and you’ll need to build the Event deck prior to any one of these. You’ll also find the game map is dual sided, with the original game tracks on one side and a new map with an inclusion of an additional track (the Tunnels) on the other side. Personally I find myself playing the standard game much more than the campaign because the campaign utilizes all the Event cards so the only real surprise is when the Event might take place instead of IF it will take place. This isn’t to say the campaign isn’t loads of fun, because it is, it’s just that once you’ve played through a handful of times the games seem to fall into a pattern; “Well, the bridge hasn’t collapsed yet. I know the bridge is going to collapse soon…”

I prefer to stick with the standard game and randomly remove some of the Event cards. This leads to more surprises (“Hey! The Bridge didn’t collapse!”) and can even make the game more difficult to survive as you might have removed some of the really beneficial events. Of course, you might remove some of the nasty events too so it could turn out your go-round with DotZ this time around is a touch easier. Still, the games play fresher as you don’t know what might pop up and what might not ever come into play.

As for the additions to DotZ, they’re kid of a mixed bag. While the components are great and various ways to play provide you with different ways to scratch your Zeds itch, I found some of the new twists to be either ho-hum, head scratchers, or even a tad detrimental to my overall enjoyment.

While the inclusion of the extra security teams and possible arrival of a group of Army Rangers help tremendously in defending Farmingdale and the Super Zeds with special abilities are a nice touch, the Typhoid Mary-ish Noelle villain doesn’t fit thematically (you can discover the components to an alien super weapon – a wee spoiler as to what’s behind the Zeds) and capturing the mad scientist behind the Super Zeds really doesn’t do anything to prevent further Super Zeds from appearing. Like I mentioned, the inclusion of these two characters just left me scratching my head a little.

Larger issues are the map itself and the additional Tunnel track. The board, while serviceable, is overly cluttered and confusing. Whereas the original edition’s map may not have been as attractive to some eyes you never had any question about how either the Zeds or your units would move around upon it. With the new map you’re almost always stopping to check the progression arrows and more than once you’ll find you’ve somehow moved counters to the wrong spot. The Tunnel track is a different matter as your units and the Zeds can get lost, but only on certain spots, and some characters have a special ability where they won’t get lost, and there’s a secret entrance to the Tunnels you can enter or Zeds can exit onto another track (but only in special circumstances), and Zeds could get lost and end up behind your defenders – closer to the town center, and… Well, you get the idea. The Tunnel track seems to add more busy work than it’s worth and suddenly it feels as if too much focus has been made to this one particular avenue of zombie advance. 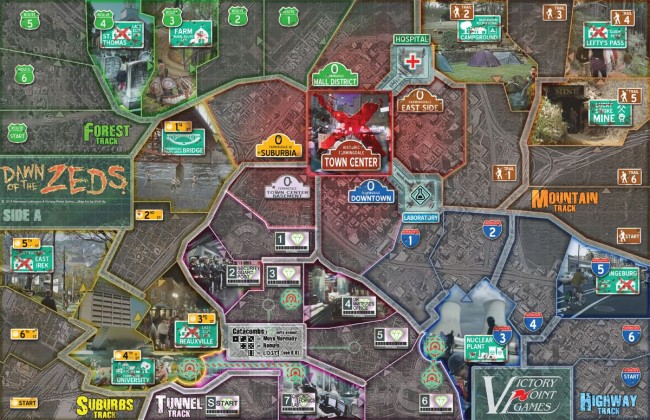 My main issue with the map and Tunnel track isn’t that they’re design mistakes – well, maybe they are a little – they just take you out of the immersion into DotZ; everything clicks along and I’m having a blast playing and then suddenly I have to pause to screw around with things which don’t enhance the gaming experience. Some of the additions or changes feel like they’re there, well, just to be there.

Don’t let the last few paragraphs dissuade you from picking DotZ though, even if you have the first edition. I understand VPG’s Tim Allen has created a new map which will be included in future releases of DotZ (Tim always does great work and designer John Welsh just showed me Tim’s output on Cruel Necessity, which is excellent) although I’m not sure what the gameplan will be regarding the map for those who already purchased the new edition. Maybe VPG’s Alan Emrich will clear that up for us. As for the Tunnel track, truthfully I just ignore the rules for getting lost and treat it like any other track for the most part.

VPG is currently releasing a lot of titles which are outside the norm for what people expect from game companies and I mean that as an extreme compliment. I understand there may have been the urge to really knock DotZ out of the park by throwing what sometimes seems like everything but the kitchen sink into the second edition. Even with some of what I believe to be small missteps in Dawn of the Zeds second edition, the game is still one hell of a nail biting, action packed, zombie fueled spectacular! Anyone who enjoys the zombie genre or rock solid solitaire games owes it to themselves to have DotZ in their collection!

Even with some of what I believe to be small missteps in Dawn of the Zeds second edition, the game is still one hell of a nail biting, action packed, zombie fueled spectacular! Anyone who enjoys the zombie genre or rock solid solitaire games owes it to themselves to have DotZ in their collection!