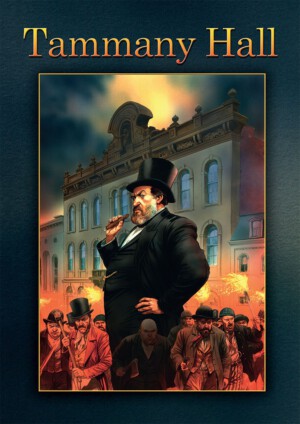 Originally released in 2007, Tammany Hall comes from the mind of Doug Eckhart, the designer of Congo Line and Hatu Matu: Chief of Easter Island. Rumor has it the look of the original 2007 release was rather blah, or that’s what I’d heard, so major efforts were made for the  redesign of the second edition by, among others, Martin Wallace (2010 IGA winner Age of Industry, Struggle of Empires, Conquest of the Empire, and many more). Much of the production and graphic talent utilized by Wallace’s Treefrog Games is on display with Tammany Hall and were it not for the StrataMax logo on the box you might be hard pressed realizing this isn’t a Treefrog game. Make no mistake that certainly is a compliment!

In Tammany Hall, each player is a politician in New York City during the latter half of the nineteenth century (approximately 1850-1870). This was a time when large American cities were introduced to wave upon wave of newly settled immigrants. New York was the largest melting pot due to the millions who passed through Ellis Island looking for entrance to a promised land. Because of this new political machines rose up to both provide for as well as exploit these diverse immigrant populations. The real life Tammany Hall was the heart of the machine which controlled the Democratic Party in New York City from the 1790’s into the late 1960s.

The game board is broken into three areas with a total of fifteen wards and the map seems to be true to the political divisions of Manhattan in the 1860’s. Which areas are in play at the start is determined by the number of players; Area I for three players, Area II for four players, and all three areas full five players. The key to victory is control of these wards and their immigrant populations. Ward 14 contains Tammany Hall, and is located in the center of the board. Tammany Hall takes place over the course of sixteen years (each game turn represents one year) and through four election cycles. Players get points for every ward in which they win an election, two points for winning the ward that contains Tammany Hall, and three points for becoming mayor (winning the most wards overall). At the end of the game players get two points for having the most political favor chips of the different immigrant groups, and one point for every unused slander token they possess. 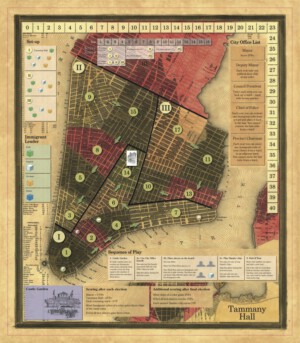 During set up, starting wards are seeded with a different colored cube, which represents different immigrant groups coming into New York City: green (Irish), white (English), orange (German), and blue (Italian). Players find that in each turn they will either place two of their ward bosses in one or two wards, or place one ward boss while also placing an immigrant cube in a ward. Placing an immigrant cube allows a player to take a political favor chip of the same color as the immigrant cube. These favor chips will come into play later.

At the end of four game turns, the first election is held and wards are resolved individually. If more than one player happen to have a ward boss in a ward, then that ward is considered contested. All players contesting the ward enter blind bidding in which they place a number of political favor chips in their closed hand. Players can only use chips of the same color as immigrant cubes in the ward. For example, if there are no green cubes in the ward, no one can use Irish political chips to bid for control of that ward. All players reveal their chips simultaneously and each player’s chips are added to the number of their ward bosses to yield a final score. The highest score then wins the ward. All tokens but one (for the winner) are then removed from the board. If there is a tie for the most votes in the ward, all tokens are removed, and no one claims that ward. Once a chip is played (or once a political favor has been called in), it is placed back in the general stock, whether the player wins or loses the election.

The player who wins the most wards becomes mayor, and gains those extra three victory points.

After elections in the wards are finished, players see who controls the most immigrant cubes of each color.  Players control all the immigrant cubes that reside in wards where they won the election. Players who have the most cubes of a particular color get three political favor chips of that color representing the differing nationalities allegiance to a particular politician.

Finally, the new mayor must appoint all his opponents to political office. Each of the offices, outside of the mayor, has a unique power that a player can use. The Deputy Mayor gets a free political chip each turn, the Chief of Police is allowed to remove one cube from the board, and the Precinct Chairman can move a cube from one ward to a neighboring ward. The Council President can only use his/her role twice during a four-year term, but it is powerful. The Council President may place a silver disc in a ward, which then freezes that ward for the rest of the term: no tokens or cubes may be placed in or removed from that ward until the next election. After roles have been awarded, new areas of the map are opened if less than five players are in the game. 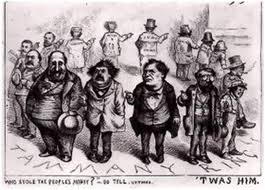 Before the next election cycle starts, all ward bosses are removed from the board except for one boss in each ward that belongs to the player who won the election in that ward. What this does is make it more difficult for one player to continually control an individual ward election after election. After the first election cycle, players can begin to use the three black slander chips they were given at the start of the game. Players spend these tokens, along with a political favor chip, to remove opposing ward bosses from their wards. Obviously, slander tokens are best used in the turn before an election after an opponent has taken his turn because they won’t have an opportunity to replace any removed ward bosses before the election.

Following the forth election the game ends and victory points are tallied to determine the winner.

For only having six pages of rules, Tammany Hall is a very elegant game with a lot of opportunity for various strategies. Mechanisms in the game provide for opportunities for trailing players to catch up and it’s very rare for any single player to be out of contention. After the first election, the mayor player goes first every turn. In an area management game such as this that can be a big handicap which offsets the additional victory points his or her honor gains. A key to winning is knowing where and when to contest control of the wards. Allowing your opponents to empty their supplies of political favors battling for wards you have no interest in is always a solid plan. Advantages within wards can come and go, so knowing where and when to spend your influence can be the difference between winning and losing. Balancing the benefit of being mayor, while dealing with the restriction of going first and the lack of a special ability, can be an interesting dilemma as well. 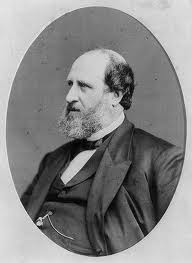 I will point out that Tammany Hall is not a game for those who shy away from direct competition. Many of your actions are meant to block the progress of your opponents. The Mayor effectively has a bulls eye on their back throughout their term and if you don’t enter into the game with the understanding that it’s every man or woman for themselves (such is the nature of politics) you might not appreciate the gaming experience of matching wits with your fellow politicians.

In the end if this were a brand new game, Tammany Hall would certainly be on my list of top games of the year. Seeing that the design is three years old, I can at least certainly make sure to give the game the credit it truly deserves. If you like fast playing, competitive games where the winner isn’t easily crowned in the early going, then I can heartily recommended taking a run for office in Tammany Hall! I look forward to sharing this game with Elliott when I visit Chicago in early October!

TGG REVIEW
9 TGG SCORE
0 VISITORS' SCORE (0 votes)
Summary
For only having six pages of rules,Tammany Hall is a very elegant game with a lot of opportunity for various strategies. Mechanisms in the game provide for opportunities for trailing players to catch up and it’s very rare for any single player to be out of contention.
REVIEW SCORE
What people say... Leave your rating
Sort by:

Sheepdogs of Pendleton Hill Now Available in the U.S.

Tammany Hall Available in the States Once Again but Act Fast!

This review could replace the rules.

Also it was not that easy to play right the first time.

Elliott gets knocked for being too vague about the rules in his reviews and my complaints are about too many details. You just can’t please everybody, nor do we try.

I'd ignore what the poster above had to say, if his comment was meant to be negative. This is probably my favorite review I read on the site. When I read a review I want a break down of the game and how you play. That gives me an idea if I think I'd like it or not and if it's going to be worth buying. You've covered all the bases and although I already own Tamany Hall this would have sealed the deal. I'd expect this kind of review in a magazine that's how good I thought it was. I don't know about anyone else but we learned to play very quickly and might have had a question or two the first time through but the reviewer is right! This game is easy to learn and hard to master. That's what makes it a great game.

Great review, Jeff. And I'm glad to see that Clay liked the game as well.

Wait. What am I saying? Another game I want to track down? Nooo!

Or, on the flip side, it's a great time to be playing games!