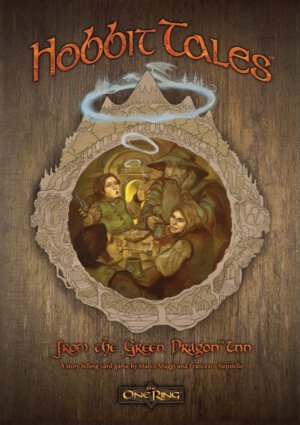 Playing Time: Around 60 minutes or so with a full compliment of players

Cubicle 7 Entertainment is well known for their high quality roleplaying systems and supplements and one of the best-selling titles in their catalogue of games is The One Ring RPG, based on the works of J. R. R. Tolkien. With that in mind, Cubicle 7 set out to bring the world of Middle Earth to the self-contained story telling genre of games. These sorts of games pack a lot of the fun of an ongoing roleplaying game into a quick hour or two of play.

Hobbit Tales from the Green Dragon Inn puts two to five players into the roles of hobbits sitting back over a pint of ale (or mead, or whatever their poison) spinning yarns meant to entertain their listeners. In order to facilitate the action each player will receive a hand of Adventure cards in which to inspire their story telling. These cards feature a title, a quote from one of Tolkien’s works, as well as symbols which can represent certain features of the narrative. These symbols include Caves, Wilds, Woods, Runes, and the Evil Eye. These symbols allow the other players to introduce Hazard cards in order to hinder the active player (or Narrator) from bringing their tale to a happy ending. Completing a story involves eventually laying down five Adventure cards. 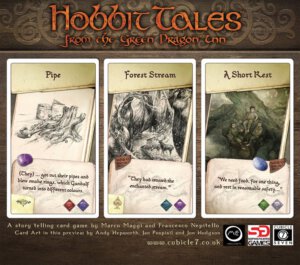 The Hazard cards also feature an assortment of the same symbols as the Adventure cards, as that’s how the non-active players can add these dangers into the story; if you can’t match two symbols on the last two Adventure cards played then a Hazard card can’t be played. While the Hazard cards are meant to toss wrenches into the Narrator’s tale they really help to add some excitement to the proceedings as successful Hazard allows the player who played the card to take over the narration for the moment. In effect the Narrator now has to roll with the punches to complete their story. There is some luck involved with the Hazards as a twelve sided die is rolled (the same as used in The One Ring) to see if the Hazard even comes into play.

Winning the game is based on the Cheers tokens the players receive during the game. For every successful Adventure card a Narrator plays they get to draw a token (with a value of one to three) while a successful Hazard negates an Adventure card – it still counts toward telling the story – and allows the player playing the Hazard to draw a Cheers token. Honestly, the scoring probably won’t matter too much for most players as the real aim of the game is to concoct some cool stories.

The amount of enjoyment folks are going to draw from Hobbit Tales from the Green Dragon Inn will have more to do with their storytelling skills more than anything else; people who are naturally entertaining tale spinners will get a big kick out of the title while other who’re a bit more introverted or shy might find playing to be a touch of a chore. This really goes for any type of storytelling game though as Hobbit Tales is really a skeleton of rules in which to hang those cool Tolkien tales.

Some people may not appreciate the fact scoring is really a random thing and no one is voting for the best story but rather tokens are being drawn for the scoring. As I mentioned previously, I don’t really think too many people will be concerned with who wins or loses but rather if everyone had a blast. Still, some gamers are all about winning or losing so it’s important to note you might be the best Narrator and lay out some sweet Hazards to throw speed bumps with other Narrators but still end up “losing” the game.

Another item to mention is the pricing seems to be a little high for what you’ll find in the box. I’m not going to rag Cubicle 7 too much on this simply because they’re across the pond, and you tend to pay a few bucks more here in the U.S. for games which aren’t produced in the States, but you’ll probably want to look to pick up Hobbit Tales from the Green Dragon Inn somewhere online who offers some deep discounting. Right now you can grab the game on Amazon for $23.95 but, in my opinion, I think a $19.99 price tag is more in line which what you get. 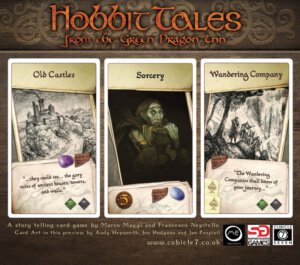 There are also some optional rules to incorporate Hobbit Tales into your games of The One Ring but I think the cards will serve more of a purpose of setting the scene and tone rather than being an indispensable tool for game play. Granted, role players are used to buying adventure sorts of cards for D&D or Pathfinder – I can’t say why but they do – so I can imagine GMs using the cards in The One Ring but I don’t think they’ll add much to the experience. Keep in mind I don’t think using minis in RPGs is much of a boost either, so take this last bit with a grain of salt since it’s based more on my preference on how to run a game.

I really like Hobbit Tales from the Green Dragon Inn. Then again I happen to be a big fan of Cubicle 7 in the first place as there’s little I’ve run across from the company that isn’t worth picking up for most gamers who dig whatever the subject matter being tackled. Sure if you hate LotR then you aren’t going to be buying The One Ring any time soon or Hobbit Tales… Still Hobbit Tales provides a nice framework in which to enjoy an hour or so of telling stories set in the world of Middle Earth. I can’t stress enough that you’re going to get out of the title what you put in  – and it isn’t as if picking up the game is going to turn you into your gaming gang’s version of Garrison Keillor – so if you have a group who can spin some good yarns you’ll want to get your hands on Hobbit Tales. If your group isn’t made up of any folks who could get behind the wheel and run an RPG for a few hours you might want to take a pass.

I really like Hobbit Tales from the Green Dragon Inn. Then again I happen to be a big fan of Cubicle 7 in the first place as there’s little I’ve run across from the company that isn’t worth picking up for most gamers who dig whatever the subject matter being tackled.