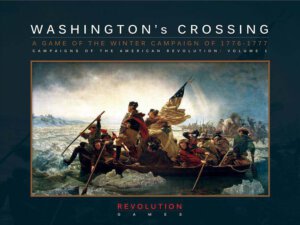 Washington’s Crossing is the first in the Campaigns of the American Revolution series from new comers Revolution games. The game is an operational level simulation of the winter campaign of Christmas Day 1776 through January 6th 1777, which culminated in the American victories of Trenton and Princeton thus turning the tide for George Washington, the Continental Army, and our fledgling nation.

Washington’s Crossing (or WC) comes in a rather shallow box but don’t let that fool you because alongside the components you’re going to find a relatively heavy game. Included are 200 die-cut counters, two player charts and tables, one British Leader Display, one American Leader Display, one 22 x 34″ map of New Jersey and Pennsylvania, a 10 sided die, and a 24 page rule booklet. All the components are of serviceable quality although some folks might be a bit disappointed the board isn’t mounted and, even though a winter campaign is being simulated, the map doesn’t display a flake of snow. The map is treated so it isn’t just simply paper and I’ll take a guess a winter landscape isn’t utilized because this is the first in a series and the upcoming games are no doubt 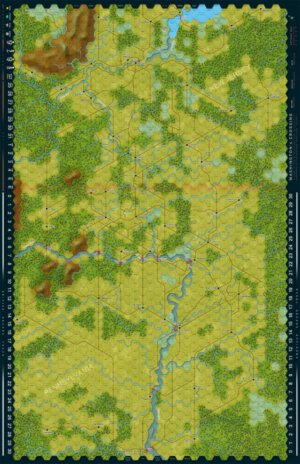 designed to link with WC. The rules are nicely presented and nothing stood out as being overly confusing or left me scratching my head.

It’s important to keep in mind the six to ten hour playtime is no joke. This doesn’t mean this is an overly complex title but there is a lot to chew on and quite a few options are available for both players.

Leaders are the main movement pieces on the map and each player has a side display where the number of troops and fatigue levels are tracked. This means your opponent never knows how many troops or what leaders may be stacked together unless they are located in an adjacent hex to one of your leaders. There are no limits to the number of leaders who may be stacked together but there is a limit to 3000 of your own troops per hex. Leaders are denoted by rank and each has a limit to the number of troops that may be directly under their command. Leaders also are rated for activation as well as a command status; Many leaders are able to activate subordinate leaders within their command radius. Each day of the campaign is broken down into four turns (three day and one night) and weather plays an important role in the game as it did historically.

I won’t go into a complete breakdown of how each turn plays but simply point out some items that WC brings to the table that really stand out.

Washington’s Crossing puts a heavy emphasis on maneuver and fatigue. As the attacker you have to pick your spots to make sure you have enough activation points, and units with low levels of fatigue, in order to increase your odds of success. Proper maneuver plays an important role as you want to place the defender in an as poor a position as possible. As the defender you’ll look to choose the best ground and allow the attacker to spend activation points and fatigue their troops and look for an opportunity to counter attack. WC does use a variable movement system which lends a sense of uncertainty and tension as you can never know if you’ll be able to have all your forces where you need them when you need them.

You’ll want to keep in mind WC is not a game in which you’ll be activating and moving all of your leaders all the time. You simply don’t have the number of activation points or levels of fatigue to continually maneuver and fight. A smart player will pick their spots to maximize the potential to deliver a hard blow to the enemy or capture objectives. Troop strengths are broken down into factors of ten soldiers on the leader display sheets and various leaders have a maximum number of men under their immediate command. Leaders can be stacked to create 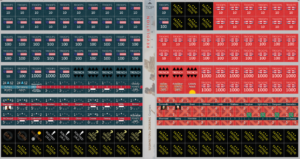 larger forces but there is a stacking limit of 3000 men per hex, per side.

The Americans begin the game with the upper hand as they have a variety of objectives they can attack right away and their advantage in movement and leader quality can be decisive right off the bat. All isn’t rosy for the colonists because come January 1st half the army goes home (as their enlistments expired) and river crossings can be extremely tricky depending on the weather.

The British player will have their hands full early on because their troops are scattered across the map making them easy pickings and the Redcoats move slower than their American counterparts as well as experiencing poor leadership to begin the game. All isn’t lost though because if the British player can hold the line through the first half of the game he’ll find the reinforcements he receives, as the Americans become weaker, and the arrival of Cornwallis can put the English in the driver’s seat.

The winner is determined at the end of the game based on victory points. VPs are scored for victory in battles, capturing leaders, and for objective towns controlled, depending on if it’s occupied by Americans or British and the importance of that town to each combatant.

All in all Washington’s Crossing is an excellent wargame and hopefully the upwards of ten hours of playing time doesn’t turn some folks off from picking up this initial effort from Revolution Games. There’s a lot to like about the game from the variable movement, to the interesting weather effects, as well as the realistic depiction of battle casualties and fatigue. I like this first effort quite a lot and look forward to future releases in the Campaigns of the American Revolution series.

TGG REVIEW
8.5 TGG SCORE
0 VISITORS' SCORE (0 votes)
Summary
Washington’s Crossing is an excellent wargame and hopefully the upwards of ten hours of playing time doesn’t turn some folks off from picking up this initial effort from Revolution Games. There’s a lot to like about the game from the variable movement, to the interesting weather effects, as well as the realistic depiction of battle casualties and fatigue. I like this first effort quite a lot and look forward to future releases in the Campaigns of the American Revolution series.
REVIEW SCORE
What people say... Leave your rating
Sort by:

‘Longstreet Attacks: The Second Day at Gettysburg’ is Now Available