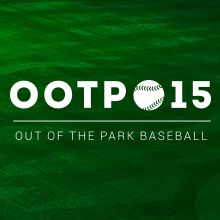 Game Name: Out of the Park Baseball 15

Publisher: Out of the Park Developments

Rating: E for everyone

As serious sports gamers already know, the Out of the Park Baseball series stands head and shoulders above other text based baseball simulations on the market. Each year Out of the Park Developments releases a new edition and, more times than not, enough additional features have been included to make purchasing the latest itineration worthwhile. This year, among other improvements, 3D ballparks and ball flight has been added to the mix but do these inclusions make the 2014 OOTP a must buy for those who already have last year’s edition? 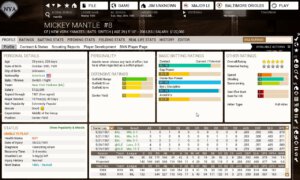 If you aren’t familiar with Out of the Park Baseball (if so you might want to check out my review of OOTP 14 here) suffice to say you take the reins of a baseball team – be it the MLB, a fictional league, or even international teams – and proceed to guide the organization through the seasons. You can start with this year’s current lineup of players featuring such exciting young players like Mike Trout, Yasiel Puig, or Stephen Strasburg and continue along through future seasons with the slew of rated minor league players eventually arriving from the minors. You also have the ability to simulate any season from baseball history so players like Watler Johnson, Babe Ruth, and Ted Williams are at your disposal as well.

One of the driving factors of OOTP is the sheer amount of customization available to your gaming experience. Gamers who want to control all aspects of their team can dive into scouting, drafting, minor league transactions, and more. Those who would rather take the path of only managing a team, while most of the high level organizational decisions are made by the front office (A.I.) can sit down and handle the day to day on the field management too. If personally managing each and every game your team plays doesn’t appeal to you there’s always the option to simulate entire seasons to see how your front office moves pan out. The reality is OOTP has the ability to be the sort of baseball experience each individual gamer prefers.

Personally, as a long suffering Chicago Cubs fan, I have a lot of fun jumping into 1960 and doing my best to lead the team to glory in the late 60s and early 70s. One of the interesting aspects of OOTP is the fact baseball history doesn’t have to play out exactly as settings are available which allow for variations in player performance. You can even encounter Hall of Famers experiencing career ending injuries well before they’ve put together a HoF worthy resume. Take note baseball history plays out very realistically and any given player with a 15-20 year career will put up numbers very close to what they did in reality. 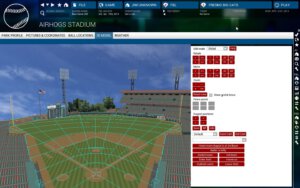 Most of the tweaks made to OOTP 15 will probably not jump right out at gamers but suffice to say this year’s edition seems a bit tighter than before. The trade offers seem a bit more realistic this time out and the sim engine appears to run a touch quicker. One new feature is 3D ballparks and ball flight. While the included ballpark is generic, I’m sure the rabid OOTP mod community will have all the MLB parks available in no time.

Even though OOTP 15 is loaded with real players the game doesn’t carry an official MLB license so you’ll have to turn to the mod community to get your hands on the logos, uniforms, player photos, and other trappings to pretty up the game since the default logos are bland to say the least. The mod community is one of the big strengths of the series and you’ll be amazed at all the add on goodies which you can plug into the game.

One thing which hasn’t changed from previous incarnations of OOTP is the fact this is one of the heftier games for those new to the series to get a handle on; there are so many options and settings you can choose from it’s easy to get lost. My recommendation for those coming on board OOTP for the first time is to take the helm of a team you’re not overly excited about and play around enough to get an understanding of the game. Once you have a few hours under your belt by all means start a new league and play with the team you’re really interested in managing. 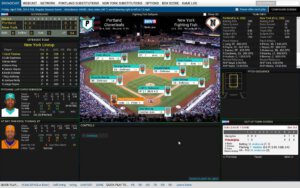 Graphically OOTP has never been a beauty queen by any stretch but fanatics of the series aren’t looking for MLB The Show; they’re interested in playing the best baseball simulation on the market. Honestly, each year OOTP moves a little closer to stealing the mantle of best sports simulation for Football Manager. Your very own baseball universe is even more immersive than before as players can become upset over lack of playing time, strange off field injuries occur, and even owners can kick the bucket leaving your manager dealing with a completely different personality pulling the financial strings.

As I previously mentioned outside of the 3D elements, most of the changes to this year’s OOTP aren’t readily apparent so I could understand owners of previous editions considering skipping a purchase this year. This would certainly be understandable (especially if someone isn’t interested in the new graphics) since it might seem like not much has changed. In truth this year’s OOTP is sharper and, dare I say, more on the ball than last year’s. Plus supporting the series is a great way to insure we keep seeing new editions year in and year out – the $39.99 retail price turns out to be a steal once you take into account all the hours of fun you’ll have in your own personal baseball world.

Once again getting OOTP is a no brainer for fans of America’s pastime as this is bar none the best baseball gaming experience on the market for those who love the managerial and team building side of things. While the learning curve is a bit steep for first timers there’s plenty in game, on the OOTP website, and the lively community forums to get anyone up to speed quickly. In other words, OOTP 15 knocks it out of the park as expected.

As serious sports gamers already know, the Out of the Park Baseball series stands head and shoulders above other text based baseball simulations on the market. Each year Out of the Park Developments releases a new edition and, more times than not, enough additional features have been included to make purchasing the latest incarnation worthwhile.