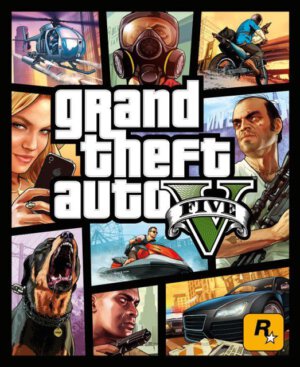 If you’ve been wondering if Grand Theft Auto V will live up to all the prerelease hype let me just say in nearly all things the title is penultimate in gaming on the current generation of consoles. From the sense one is moving through a living breathing world, to the varied and exciting missions, to the graphics and control system GTA V is head and shoulders above the competition. Add to this GTA V can be wickedly funny (although very dark humor of course) while providing plenty of thrills and spills. You best be prepared for a heaping helping of social satire on top of your gameplay though.

Everything is fair game to the folks at Rockstar as they take on the far right, the far left, mainstream America, celebrity lifestyles, the media, even gamers themselves get a slap on the ass. The fact everything seems to be cranked up to eleven makes the laughs even bigger while the pseudo-reality of the setting isn’t insanely too far off base wherein the whole game comes across as silly. The social commentary has bite as we look into a fictional world which, unsettlingly, hits pretty close to home. 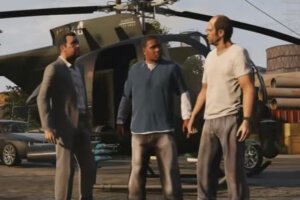 It’s important to note you won’t be running across anyone you could categorize as a “good guy” in GTA V. This isn’t to say all the characters are complete scum but they all possess very less than noble qualities. You’ll learn everyone you encounter will be a liar, thief, cheater, slacker, or worse so you don’t feel too bad giving many of them what they have coming anyway.

Michael is the mid-40s ex-grifter who looks to live the good life while surrounded by a cast of characters who hate his guts. Franklin is the inner city kid who strives to avoid the gangbanger lifestyle while always on the lookout to make a big score. And then there’s Trevor. Ah yes, Trevor. Trevor is the lifetime criminal who engages in drug fueled psychopathic slaughter and mayhem.

The plotline involves all three and the narrative weaves the individual tales together in a way in which you’re sure to enjoy the character missions. It’s pretty clever how you move around from character to character. For example, if you’re in the midst of one of Franklin’s missions you feel as if both Michael and Trevor are simultaneously up to their own antics in life. When you select one of the characters, the camera zooms into their location as they’re in the middle of something. I won’t ruin some of the surprises you’ll encounter but this design mechanic further draws you in as GTA V takes place in a living breathing world where things are going on even if you aren’t there to witness them. Or at least that’s what your brain keeps telling you… 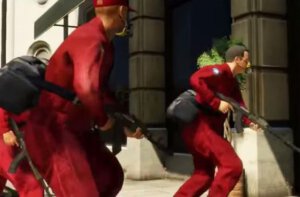 One of the aspects of playing through as three different people is each is uniquely qualified to perform different missions; Franklin is more about driving while Trevor is more about making things blow up. I will mention the missions involving Trevor are the most insane and over the top so the rampant lunatic violence does take a bit getting used to but gone are the days of playing GTA as a single schizophrenic who follows one moment of waxing poetic about the evils of violence and crime with a mission that piles the body count sky high. While playing as Trevor requires the biggest suspension of disbelief I do have to mention those very same missions are some of the most spectacular action pieces of the game.

A new addition to GTA is the heist. These are missions which are more detailed than anything seen before in the series and you can tackle them in a variety of ways. You’ll have at least two approaches (one is low profile and stealthy and the other with an eye toward maximum mayhem) and you never feel as if the action is scripted toward a single avenue toward success. I have to give a lot of credit because GTA V can handle things mighty well on the fly and very rarely will you try something that tosses out a mission failure right off the bat. This isn’t to say there isn’t any scripting, because there is, but very rarely is it overly apparent. You’ll still fail from time to time because you wandered off script though.

While I’m on the subject of failing missions, Rockstar has finally incorporated checkpoint saves so the frustration of repeatedly driving six minutes crosstown in order to screw up a mission yet again are gone. Nice to see the designers got onboard with that. 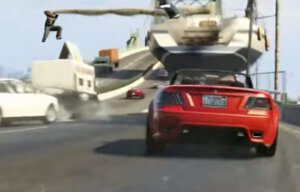 There’s also plenty to see and do when you’re just out and about in GTA V and you could spend hours just tooling around town and playing the minigames without ever taking on a mission at all. Interestingly enough you’ll find yourself wanting to explore more and more of the huge GTA V world organically as you’ll never know what you could stumble across.

When I say there’s tons of activities to keep you entertained I’m not kidding. Now you can play tennis, go hiking, get in a round of golf, race on land and at sea, or fly aircraft just to name a few. Hell, knock yourself out with some yoga if you’d like.

Technically GTA V may be the biggest, baddest, best looking game world ever created for the Xbox 360 and PS3. You can tell the game is pushing the consoles to the limit and you’ll see some graphic pop ins and frame rate drops on occasion (normally the longer you’ve played) but it’s never anything serious enough to detract from your enjoyment. The acting and voice work is also top notch and the overall story is a huge winner as well.

As in any GTA game you’ll want to have your in game radio cracking whenever you have the chance as the music selection is once again excellent and there’s plenty of laugh out loud commercials and talk.

Folks know I like to keep my reviews spoiler free so I’m only providing very broad strokes since you’ll want to experience all the game has to offer for yourself. But let me just say GTA V packs plenty of jaw dropping moments!  The story packs plenty of punch too as you and your friends will no doubt have a laundry list of favorite moments to compare once you complete the game. You’ll get plenty of game play too as you’ll easily spend thirty hours or more with the title depending on the amount of exploring you do. 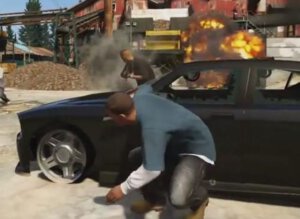 Grand Theft Auto V is Rockstar’s most ambitious title yet and although the subject matter and game style might not be every gamers cup of tea, it still doesn’t take away from the fact GTA V is easily one of the most impressive video games ever created.

One final note I should toss in regards sex, drugs, and violence. First of all this is a GTA title so you know there’s going to be plenty of the three and I’m sure we’ll be hearing an outcry tomorrow about how games like this are ruining America’s youth and whatnot; that’s a given. GTA V embraces its mature rating in all aspects that’s for sure. Yet I will mention, even considering myself to be a fairly jaded person, there are a couple moments where I thought GTA V crossed the boundaries of good taste.

I’m certainly not the sort of person who would ever call for censorship within any sort of media but twice I did sit slack jawed thinking to myself, “Wow. I can’t believe Rockstar went there…” These still didn’t change my overall impression of the game as anything other than amazing but I do want to mention you might be shocked a bit while playing GTA V.

Why Are MMOs So Popular?

I’ve been playing games for a lot of years so my ultimate titles are those which you just couldn’t stop playing like the original Civilization, X-Com, a lot of the old SSI and Microprose games. Although graphically they couldn’t wave a stick at anything produced in the last decade those games were still packed with so much going on you’d spend days off from work glued to your PC.

If I’m going to toss out something is one of the greatest video games created, it also has to be said I don’t think GTA V is THE greatest. Thus the use of the word penultimate…

Sounds good–and I agree, I spent many an all nighter play Civ, X-com, Panzer General, etc.

How could I have forgotten Panzer General?!?!?! That game ate up hundreds of hours of my life! 🙂

I give it an average score…