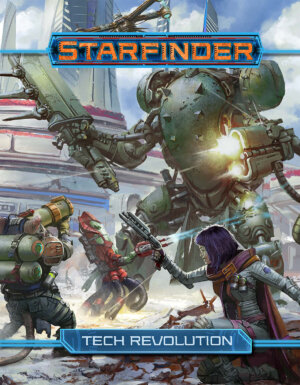 Starfinder – Tech Revolution opens with the introduction of the nanocyte, a new class. The nanocyte’s body plays host to millions of nanites that serve the player-character as tool and weapon, depending on the situation. At first level, a nanocyte is capable of relying on these miracle machines to form a cloud for concealment, to enhance their own bodily capabilities –including the addition of temporary hit points—or to form freestanding, non-consumable gear, as well as cybernetic implants. Players also select a primary nanocyte faculty, roughly akin to a school of magic, that gains new techniques every four levels. Other new classes include the biohacker, who straddles the line between saving lives and ending them; the envoy, who’s parlayed telecom into charm; the reality-bending witchwarper; the mystic, whose connection extends far beyond the realm of just magic; and 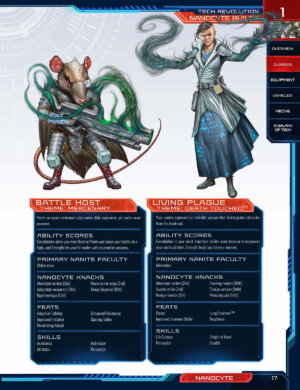 more. Each class explores its relationship with technology in different ways, though all appear to be nicely balanced for both combat and exploration.

The new item additions are likewise engaging, ranging from a suit that allows wearers to jump forward in time to helmets that allow for rudimentary telepathy and even a videogame for telepaths, complete with rules. Characters can now pay for fashion site subscriptions for a boost to culture checks or even blow up a plumbing system Anyone who has ever suffered through a coding challenge in real life will particularly enjoy the Programmer’s Plushie, which provides more in-depth assistance as well as cheerleading. The addition of hoverchairs –both standard and sporty—is a welcome addition for those who might like to see themselves represented with their mobility aids and helps reinforce Paizo’s commitment to making room for everyone at the table.

While not immediately highlighted, the chapter on new equipment also adds rules for hacking encounters. Elegantly designed, hacking is a straight-forward system to fold into any game and feels like a natural inclusion for both Tech Revolution and the Starfinder world at large.

Unsurprisingly, the vehicle and mech sections are likewise in-depth and offer no shortage of customization and building options. For mechanics-oriented players, this will be a particular delight, while more world and story-oriented players may prefer to skim this section instead. Though not a particular draw for this reviewer, the thought and care put into the design of these systems was evident and fans drawn to this style of play will no doubt be delighted.

Perhaps the most interesting section for storytellers is the final chapter, entitled “A Galaxy of Tech.” While the equipment chapter does include a welcome overview of many popular chain and independent stores, “A Galaxy 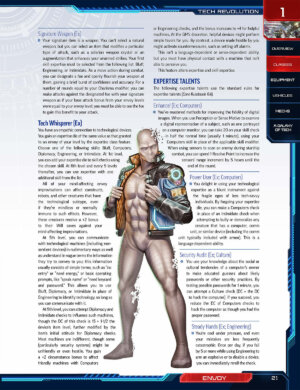 of Tech” offers a variety of short, flavor-packed pieces that help to conceptualize how the broader Starfinder world interacts with and reacts to various technologies and their impact on daily life. Some of these small essays fit within the bounds of the expected; it’s helpful to better understand energy production, medicine, or media. Others feel like obvious choices that, on the nose, seem as if they’re only there for flavor, but are instead the seeds of whole campaigns just waiting to be discovered. Want to know more about advertising? Shipping? Domestic robots? It’s all inside. Also included in this section is the utterly delightful “Technobabble,” a guide to commonly used technology-related slang terms along with their cultural origins. For storytellers eager for new material, “A Galaxy of Tech” alone is worth the price of the book.

An addition such as Tech Revolution lives and dies on its ability to expand the feel of the world and to substantively add to the gameplay options and mechanics of the core title. Thankfully, Paizo nails it. The book expands on an already vibrant world in ways, both large and small, that will no doubt please longtime fans and newcomers alike. Tech Revolution takes an expansive view on its title and delivers a not-to-be-missed addition to the Starfinder canon.

TGG REVIEW
9 TGG SCORE
0 VISITORS' SCORE (0 votes)
Summary
Tech Revolution is a substantial addition to the toolbox for Starfinder players and GMs alike that opens the door to untold story potential. Created in response to sustained fan feedback, Tech Revolution introduces new classes, gear, vehicles, and mechs, but really stands out for its substantive exploration of technology in the broader Starfinder world.
REVIEW SCORE
What people say... Leave your rating
Sort by:

Starfinder: Pirates of Skydock Board Game Arrives This August