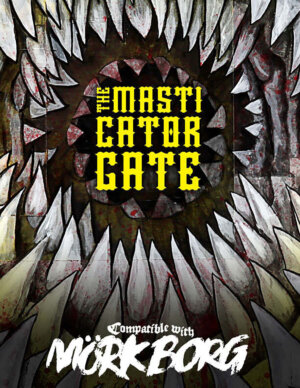 A new Bundle of Holding is featuring a load of third party Mörk Borg compatible adventures and supplements. You can get started for $12.95 or go all in for the current threshold price of $25.87. The savings run through January 31st and ten percent of your payment (after gateway fees) will be donated to this offer’s pandemic-related charity, Direct Relief.

For just US$12.95 you get all five third-party supplements and adventures in our Starter Collection (retail value $51) as DRM-free ebooks, including two campaign adventures from newyear Studios, The Box of Shadows and The Bridges of Mur and the Endless Sea,; two supplements from Philip Reed, Calo’s Book of Monsters and Tower of Scoundrels; and Richard Kelly’s Fisk Borg, which expands Mörk Borg with much-needed rules for sinister and ominous fishing.

And if you pay more than the threshold price of $25.29, you’ll level up and also get our entire Bonus Collection with five more indie titles worth an additional $69, including The Masticator Gate campaign (and its Endless Demons Deck) from SkeletonKey games; the miniatures game Forbidden Psalm from OptimisticNL; and Christian Eichhorn’s brutal adventures Vaults of Torment: Blood is Fuel and Temple of the Kraken God.