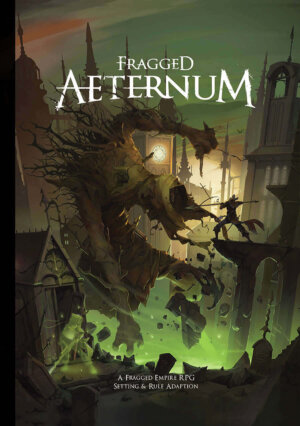 A new Bundle of Holding has arrived offering big savings on the Fragged Aeternum roleplaying game from Design Ministries. You can get aboard the fantasy RPG for as little as $14.95. These savings run through August 2nd and ten percent of your payment (after gateway fees) will be donated to the charity chosen by Fragged designer Wade Dyer, Tearfund.

Get fragged — twice! This Fragged Aeternum Bundle is one of two offers now in progress featuring the Fragged Empire tabletop roleplaying game and its many settings. If you don’t already have the Empire core rulebook, along with Fragged Kingdom and Fragged Seas, start with our revived January 2019 Fragged Bundle in progress. Then jump back here for this all-new companion offer that adds the Fragged Aeternum setting of gothic horror in an unbounded city, plus recent supplements and adventures for all the Fragged RPGs.

For just US$14.95 you get all five titles in this offer’s Starter Collection (retail value $62.50) as DRM-free .PDF ebooks, including the complete 165-page Fragged Aeternum setting book; the Antagonist Archive for Fragged Empire; and three Fragged scenarios: Genetic Spectres and Alien Flame (both for Empire) and Endless Depths (for Aeternum).

And if you pay more than this offer’s threshold price of $35.12, you’ll level up and also get this offer’s entire Bonus Collection with seven more titles worth an additional $69, including the three region guides funded in a June 2019 Kickstarter campaign — Greyburgh Market (for Aeternum), Rachel Swagger’s Guide to Mishpacha (for Empire), and Arcane Bay (for Kingdom) — and four Armoury guides full of weapons and equipment for Empire, Kingdom, Aeternum, and Seas.