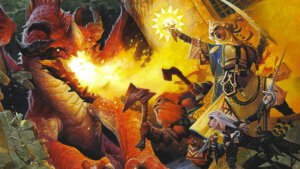 While most of the world is staying inside, one way to stave off boredom and stay sane is to jump into some roleplaying adventures. Right now Paizo Inc is offering 25% off their entire catalog of Pathfinder and Starfinder PDFs so grab plenty of fantasy and science fiction action while the savings are hot!

Just because we’re practicing safe physical distancing doesn’t mean we can’t have amazing adventures together. From now through May 3rd, save 25% on all Paizo PDFs, including Pathfinder Second Edition, Starfinder, and even classic Pathfinder titles.

Not sure where to begin? Here are some top picks.

Looking to save on an evening of adventure? Check out the scenarios available through the Pathfinder Society and Starfinder Society.

Your galactic journeys through science-fantasy begin with the Starfinder roleplaying game Core Rulebook and Beginner Box. Fill your galaxy with creatures from the Alien Archive, Alien Archive 2, and Alien Archive 3, each bringing new playable character races.

Not ready to build your own galaxy of civilizations? Pact Worlds brings the universe to life. Add the Armory and outfit your heroes and monsters with the latest weapons and armor, or include the Character Operations Manual and add three new classes to your game.