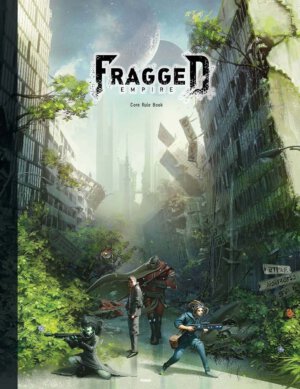 A new money saving Bundle of Holding has arrived and it features the Fragged series of RPGs from Design Ministries. You can get aboard for as little as $14.95 which will include four releases for Fragged Empire, including the corebook. These savings run through August 2nd and ten percent of your payment (after gateway fees) will be donated to the charity chosen by Fragged designer Wade Dyer, Tearfund.

Adventurer! We’ve resurrected our January 2019 Fragged Bundle featuring Fragged Empire, the tabletop roleplaying game of exploration and rebuilding in “post-post-apocalyptic” adventures. In the far future you are a genetically engineered remnant, emerging from genocidal war to reclaim a lost empire. Some worlds have fallen to barbarism; some retain technology so advanced it seems magical. You stand at the dawn of a new civilization, a time of opportunity and danger.

This bargain-priced revival once again gives you everything you need for science fiction, fantasy, and piratical adventure using this flexible and fast-growing system. For just US$14.95 you get all four titles in this revived offer’s Starter Collection (retail value $55) as DRM-free .PDF ebooks, including the beautiful full-color 385-page Fragged Empire core rulebook (plus the free Quick Start Rules and the adventure The Ghost Ship Carthage); Protagonist Archive 1; the full-length introductory adventure Let Sleeping Gods Lie; and the rules expansion Hacked.

And if you pay more than this revival’s threshold price of $25.16, you’ll level up and also get this offer’s entire Bonus Collection with four more titles worth an additional $50.50, including Fragged Kingdom and Fragged Seas; Classic Races and Magic (add elves and clerics to your Kingdom); and Fragged Dieselpunk Mecha because why not.