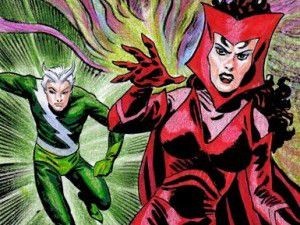 Joss Whedon spoke to IGN implying we’ll be seeing both the Scarlett Witch and Quicksilver in Avengers 2. While attending ABC’s Upfront, Whedon explained why he digs the brother/sister duo as well as going on record regarding Iron Man’s appearance in the sequel. At this point no one’s sure if it will be Robert Downey Jr. donning the armor though. Be forewarned if you haven’t seen Iron Man 3, and don’t want the ending spoiled, you might want to take a pass on reading the entire article on IGN.

Here’s the Whedon quote from IGN:

“You know, they had a rough beginning. They’re interesting to me because they sort of represent the part of the world that wouldn’t necessarily agree with The Avengers. So they’re not there to make things easier. I’m not putting any characters in the movie that will make things easier.”

Granted, Whedon had earlier alluded to a brother and sister being added to the Avengers mix but I don’t know if I would say this is exactly a confirmation…