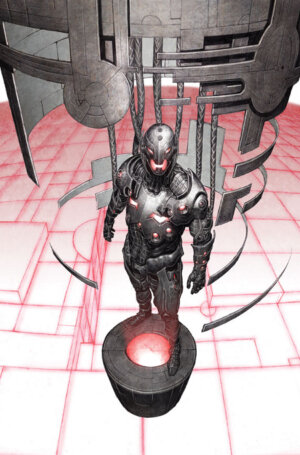 Marvel Comics has plans for another universe spanning crossover event (ala Civil War and Secret Invasion) as they pick up from the 2012 Free Comic Book Day release of The Avengers: Age of Ultron #0.1 with a ten issue main story line next March. The series will run from March through June (including three issues released in March itself) and writer Brian Michael Bendis promises this will be a tale even he, as a “jaded fanboy” is blown away by. Bendis is finishing his run on Avengers as Marvel Now rolls out but this doesn’t mean he’s finished with Earth’s Mightiest Heroes.

We’ve come to learn the story deals with nearly all the superheroes enslaved by Ultron with just a small group remaining including Spider-Man, Moon Knight, Invisible Woman, Taskmaster, Beast, Emma Frost, She-Hulk, Luke Cage,  and Wolverine left to attempt to take down Marvel’s most powerful sentient robot. Bryan Hitch provides art for the first half of the series (which due to the rapid clip the issues will be released is a bonus for Hitch fans who don’t get to see his exceptional artwork on such a consistent basis) and the final five issues will be drawn by Carlos Pacheco & Brandon Peterson. According to Bendis only six people in the entire world know what the outcome of the event will be…

Sorry to say, I’m not one of them.

The gameplan for Marvel is to deal with the fallout from Age of Ultron throughout the rest of the summer issues.