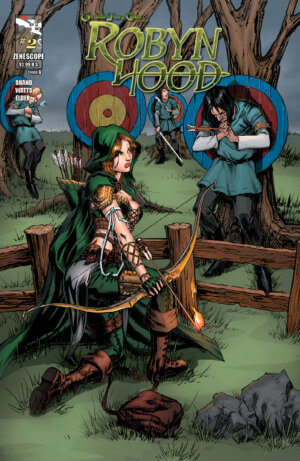 New releases from Zenescope for the next two weeks, including a new trade paperback for Wonderland and the second issue of Robyn Hood.

A BRAND NEW Grimm Fairy Tales series that reinvents the classic tale of action and adventure is HERE!!!  Robyn now finds herself trapped in the realm of Myst in the city of Bree where she will not only discover her true origins but be forced to embrace her true destiny…whether she likes it or not.  Action, adventure and fantasy brought to you by the company that does it best!

Calie saves Violet from the sacrifice of the town’s people only to find herself face to face with the powerful spirit of her long deceased brother, Johnny the Mad Hatter.  Will she find a way to defeat madness from beyond or will the Mad Hatter return more diabolical than ever.  From the writers and creators who brought you Zenescope’s original Wonderland Trilogy comes a whole new world of madness like you’ve never seen before. 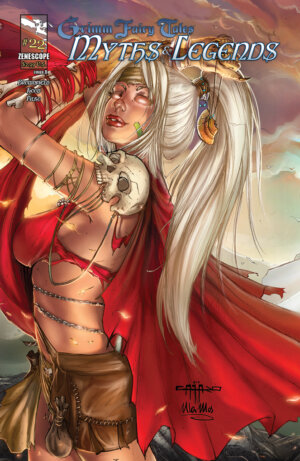 The Summoning story arc begins here and the Grimm Universe will never be the same.  For thousands of years Helios has remained trapped and imprisoned in the heart of the sun but now the separated pieces of the sunstone of Ra are being brought together to release this entity who’s unleashed power may very well destroy the world as we know it.

The COUNTDOWN to the brand new WONDERLAND ongoing series begins here!!!  The 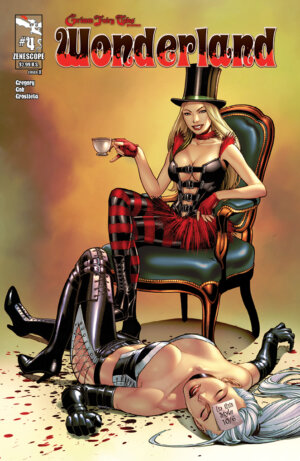 Jabberwocky has been defeated.  The Queen of Hearts is dead and Wonderland is in a state of chaos with no ruler on the throne.  Enter the Red Knight who is determined to destroy all of Wonderland and the world at large by unleashing a deadly ancient force long thought to be gone.  Meanwhile on earth, a literary student researching Lovecraft will discover a long forgotten secret that could save or damn us all.  Don’t miss out on this incredible mini-series that sets the stage for the upcoming Wonderland ongoing series!

The series that everyone is talking about returns and a BRAND NEW STORY ARC BEGINS!!! After the life shattering events of the last volume of FLY, Eddie is now a broken man set on a path of self-destruction he may not escape. Meanwhile Francis sets his end game plan in motion and the Hero is about to get a deadly taste of his own vengeful medicine. The critically acclaimed series continues! Set in a world where the super heroes aren’t really heroes at all…How far would you go to Fly?  From the creative team of the hit series Alice in Wonderland and featuring three incredible covers by the legendary David Mack (Kabuki), Ale Garza (Deadpool) and Darick Robertson (The Boys).

In this night and in this hour…The years have passed quickly for The Charmed Ones since they learned of their magical heritage. In only one decade they have experienced so much love and loss, joy and sorrow, failure and success. But time marches on and new challenges will be met as Phoebe is haunted by her past, Piper must deal with the present, and Paige is forced to cope with the future. See how season 9 comes to a close!!! Collecting issues 20-24.