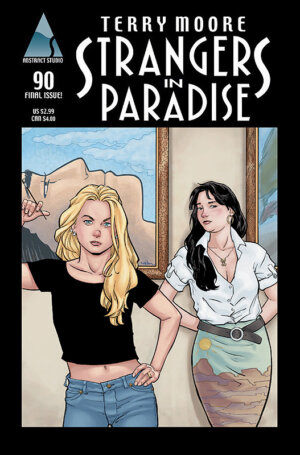 I have to say my favorite independent comic series of all time is Terry Moore’s Strangers in Paradise, from Abstract Studios, and I can’t tell you how many times I’ve loaned my volumes out to friends to show them the wonderful series and to introduce them to a whole wide world of comic books without a super hero in sight. Now comiXology is bringing SiP to readers in a digital format.

All 107 issues and 19 trades of Terry Moore’s Strangers in Paradise are available now on comiXology in their patent pending Guided View reading technology. For owners of the new iPad, the series can be experienced in comiXology’s high definition CMX-HD format.

“ComiXology fans already know and love Terry’s current Rachel Rising horror series and have devoured his recently concluded Echo sci-fi series, but we’re more excited than ever to bring the work that put Terry Moore on the map with today’s debut of Strangers in Paradise ,” said co-founder and CEO David Steinberger. “With the perfect mix of humor, romance and drama, Strangers in Paradise is an amazing read for hard-core comic fans and new readers alike, and we’re honored to bring the entire amazing work to our world-wide audience.”

Terry Moore’s Strangers in Paradise focuses on the difficult relationship between a kind-hearted hopeless romantic Francine, her best friend Katchoo a jilted artist with a mysterious past, and David Qin an NYU art student madly in love with Katchoo with a few secrets of his own. A mix of romance, comedy and thriller, Strangers in Paradise has received critical acclaim since it’s original print debut in 1993. Through out its run the series has received multiple awards including the Eisner Award for Best Serialized Story in 1996, the National Cartoonists Ruben Award for Best Comic Book in 1997, as well as the GLAAD Award for Best Comic Book in 2001 and 2008.