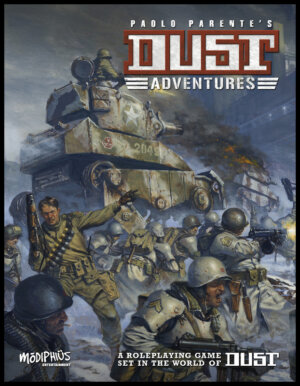 Following the move from Fantasy Flight Games there’s been a lot going on in the Dust universe and Modiphius Entertainment has announced they’ll be bringing Dust Adventures to market in Spring/Summer of 2014. The first release will be a core rule book and setting guide to be followed by supplements and adventures set in our pal Paolo Parente’s imaginative alternate WWII universe.

Scheduled for Spring-Summer 2014, DUST Adventures will consist of a core rulebook and setting guide and will be followed by supplements and campaigns. The books will feature both new artwork as well as stunning photography of DUST miniatures.

The campaigns will also feature DUST Tactics and DUST Warfare missions allowing fans of the miniatures games and roleplayers alike to enjoy the DUST universe in new ways. The system being written for DUST Adventures draws heavily on the elegant systems of DUST Tactics, uses the same familiar dice, and aims to easily bring characters from DUST Tactics in to the roleplaying game or roleplaying characters in to your DUST Tactics or Warfare games. 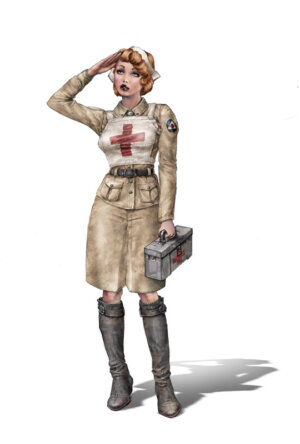 Campaigns will explore the background behind the major events in the DUST universe as well as presenting new storylines for players. Allowing players to create heroes from the Allies, the SSU, or independent factions, the game system is designed for both first time roleplayers as well as offering advanced rules for experienced players.

Modiphius recently launched the Achtung! Cthulhu game line via Kickstarter and is producing a cross-over book called Achtung! Cthulhu: Secrets of the Dust, which lets players mix characters from both universes in a terrifying mission beyond their worlds. This book will be compatible with the DUST Adventures roleplaying game, DUST Tactics and DUST Warfare.

Sign up on this page to find out more about DUST Adventures and you can also join in with playtesting and development!

If you’re at Gen Con come and see us on the Modiphius & Chronicle City Stand #1751 to find out more!