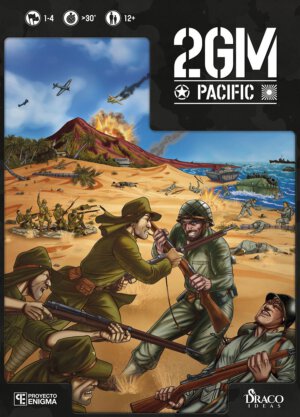 A new theater of World War II is about to come to the 2GM game system from Draco Ideas. In 2GM Pacific the forces of the United States and the Empire of Japan face off in battle on islands all across the Pacific Ocean. The game is for one to four players, ages 12+, and plays in around 30 minutes or less. The project is over 350% funded and you can reserve a copy of the base game and stretch goals for a $44.00 pledge through December 19th. Expected delivery is June 2020 and shipping is not included in your pledge.

2GM Pacific is a tabletop wargame that allows you to recreate epic battles between the United States and the Empire of Japan in the Pacific Ocean Theatre of World War II.

2GM Pacific is a standalone expansion, so you won’t need previous editions of the game to play. All the components (game board, rulebook, solo mode, art, tokens) have been revised and updated.

It is a game for 1 to 4 players with a strong army-building component, where cards represent military units and the various actions they can perform on the battlefield. Battles take place in turns until one of the players fulfills their victory conditions. Deploy units on a big game board and upgrade them during the battle with extra gear tokens. Generals will have to optimize the resources provided by their nations and take advantage of the terrain to defeat their enemies.

The game includes a highly immersive Campaign Book with Historical Scenarios to recreate the entire Pacific War: defend the Philippines against the Japanese attack, fight in Guadalcanal, disembark at Tarawa, penetrate the Jungle of Saipan, take back the Philippines, survive Iwo Jima and fight gruesome battles in Okinawa.