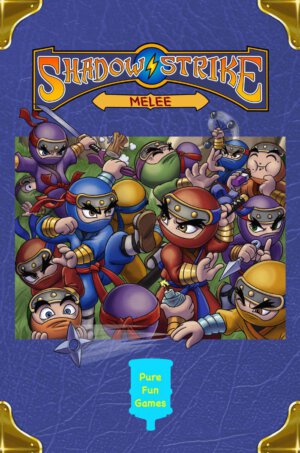 Playing Time: 10 minutes or more, depending on the number of players

Normally, here at The Gaming Gang, you don’t see too many reviews for games which are about to hit a Kickstarter funding roll out. The reason behind this is simple; nine out of ten times when someone approaches me to review their title it really isn’t anywhere near the state of what the end product a buyer will purchase. I’m not the sort of person who gives my seal of approval on anything if I can’t see at least 95% of exactly what a backer will receive once that game ships. On occasion though I do encounter what I believe is essentially the finished product and Shadow Strike: Melee (mainly referred to as SSM from here out) is one of those titles.

The premise of SSM is each of the players is a student at a ninja school and everyone is aiming to pass their final exam: a ninja class free for all brawl. Unless you decide to play in teams though, there can only be a single winner of the contest and it is last ninja standing. Interestingly enough, you can actually play with as many as nine players and create a mega sized fight. Get ready to cue up Ballroom Blitz for your listening pleasure… 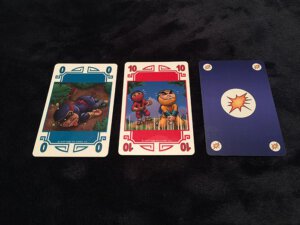 The game includes two decks of cards. First is the fight deck which consists of sixty-six cards numbered zero through ten. The various pieces of artwork on the numbered side are light and fun with ninjas laying the smack down on each other, while the back of each card shows what I would call a “bang” icon. These icons represent hits your ninja receives. The second forty-two card deck is made up of items and I’ll discuss those in a moment.

The gameplay in SSM is very straight forward and easy to jump into. Each turn a player will choose an opponent to battle. The twist here is that you can see your opponents’ fight cards but you have no idea what you may possess. Once you’ve chosen who you want to tangle with on that turn, you’ll let your opponent know they are the target of the attack and blindly play one of your fight cards. They respond by also playing a card and the player with the higher valued card is the winner and the loser takes a hit; the hit is represented by turning a fight card in your hand so the “bang” icon I mentioned previously faces the other players. In the case of a tie, no one takes a hit. Used fight cards are then placed in a discard pile and the involved players draw back up to three fight cards. Once a player has received three hits they’ve been KO’ed and are out of the game.

The item cards add some variety to what would otherwise be a blind man’s bluff game of War by allowing players to do one of three things: a shuriken allows a player to begin heir turn by not only selecting their target but also what fight card the opponent must play; an energy bar allows a player to draw the top card from the fight deck to replace the card they’ve played in a current fight they’re involved in – with more than two players this card also allows a player to join a fight they weren’t originally a part of giving them a chance to dole out hits to more than one player. You may also use more than one energy bar card in a fight regardless of the number of players; a smoke bomb allows the player to replace the fight cards they have in hand and ends their turn. 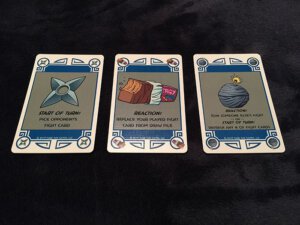 Something to keep in mind is hand management. It’s important to remember which cards face you and which face the other players. Items always face you and that’s easy enough. Once you start to accumulate hits it can get a little tricky. You always have your hits facing out toward the other players but don’t forget these cards can still be used in a fight. This actually gives a player close to being KO’ed a slight advantage because the values of these cards are hidden from everyone else. Of course, this won’t be helpful if all you have are low valued fight cards regardless if people can see them or not. Once a fight is completed, the involved players will draw back up to three fight cards and make sure the hits they’ve received are facing outwards. Players draw three new item cards only when they no longer have any items in hand.

If either draw deck ever runs out simply reshuffle the discards to create new decks. Play continues until only one player or team remains and they are declared the winner of the final exam.

I have to say Shadow Strike: Melee is a perfect game to get your night of light gaming rolling or to wind down from more strategic fare. Of course, those who are into more heavy mental lifting sorts of games will feel there isn’t much to the proceedings and it’s a lot of random luck, and they would be correct, but I also found younger gamers got a huge kick out ninjas smacking down each other. There’s enough going on to keep older gamers from tuning out too and it game is ideal for a bit of good-natured smack talking. While the game easily accommodates up to nine players, keep in mind this also ratchets up the playing time involved and the downtime many of the players will face between turns. This isn’t a deal breaker by any means but I think the sweet spot is four to six players as a full nine player game (especially if you aren’t playing in teams) will drag.

In the end, Shadow Strike: Melee is a fun distraction which will hold plenty appeal for the kids in the house while possibly not so much for adults; especially those who downright hate a lot of randomness in their games. The design accomplishes what it sets out to achieve by bringing an easy to learn, quick card driven ninja brawling game to the market. Nothing revolutionary or ground breaking to see here but simply an entertainingly light game for all ages.

While Shadow Strike: Melee doesn't bring anything revolutionary or ground breaking to the table, the design succeeds in what it sets out to accomplish. The game is a nice bit of fun and will certainly appeal to younger gamers or those looking for some family friendly fare. Perfect to entertain the kids of get a night of gaming rolling before pulling out the heavier, more strategic titles.