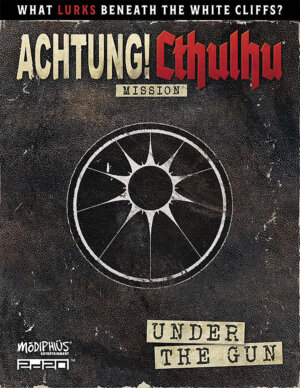 A new adventure has arrived for the Achtung! Cthulhu 2D20 RPG from Modiphius Entertainment. In Under the Gun, the player characters explore a mysterious building found within the White Cliffs not long after the Miracle at Dunkirk. The PDF is available at DriveThruRPG for $5.99.

Dover, June 1940. After decisive defeat in the Battle of France, German forces hover poised a mere 20 miles away across the English Channel. Artillery is rushed to the Dover area, and shelters and bunkers are dug into the famous White Cliffs. Then, beneath the town, a strange discovery is made.

Buried within the cliffs of 100-million-year old chalk lie the remains of an unusual building. The landing-ground for Romans, Saxons, Normans, and countless other invaders throughout history, the Kent coast is no stranger to antiquities. An archaeologist is dispatched from Cambridge University to evaluate the find.

But this is a structure like no other and it contains a deeper mystery, whose truth is better concealed from an already nervous British public. Section M dispatches agents to investigate, but can they uncover the truth underlying this ancient site and will they survive the dramatic conclusion to a shadowy drama which is played out Under the Gun?

• Under the Gun is a standalone 15-page adventure for Achtung! Cthulhu 2d20 for 4-6 agents.

• Explore an ancient mystery buried deep within the iconic white cliffs of Dover and unearth an artefact millennia old.

• Offers a mix of classic investigation, exploration and combat to suit all play styles!