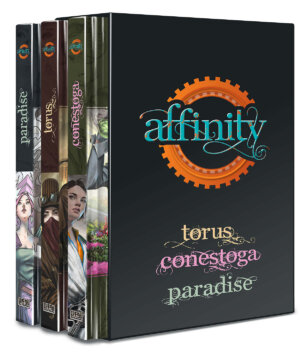 Today see’s the launch of a trio of new 5E setting books, entitled Affinity, from Dias Ex Machina. Conestoga, Paradise, and Torus each feature unique worlds with new classes, backgrounds, gear, monsters, and more! You can reserve a copy of a single color book in PDF for a $14.00 pledge or grab all three in color, in PDF for a $34.00 pledge. If you’d like the physical hardcovers, in color, score a single book for a $39.00 pledge or grab a slipcase set including all three hardcovers in color for a $99.00 pledge.

You can check out my Kickstarter preview right here.

“MECHA BATTLE FOR CONTROL OVER A MASSIVE SPACECRAFT”

The name refers to a spacecraft thousands of kilometers in length built and later abandoned by unknown entities, leaving dozens of competing factions living within geodesic domes scattered across the vessel’s surface. Employing powered armor and emerging individuals possessing psionic abilities, these factions battle for control over resources, and the remaining hidden technology still residing in the spacecraft as it drifts through deep space.

“DUNGEON CRAWLING INSIDE AN ALIEN MEGA-STRUCTURE”

Bythos is a constructed world and the centerpiece within a full-scale orrery. Moons orbit via tethered arms to the core world except for one, Abraxas, home of the assertive Aegis who look upon the twelve kingdoms below, tweaking and adjusting the political atmosphere as they see fit. The Aegis are the only ones permitted to operate technology of any kind, forbidding its use to those on the planet.

“STEAMPUNK AND OCCULT MAGIC WITHIN A POST-APOCALYPTIC WORLD”

Named after its unique ring-shape, the Torus was once the uncontested territory of the Iokon Caliphate, which covered the inner shell of the world with a nearly unending cityscape.  Centuries after an ecological disaster, only a dozen city-states remain, reliant on unique steam-based technology, with the only means of transportation between them being the hundreds of thousands of train tracks leftover from a fallen empire.