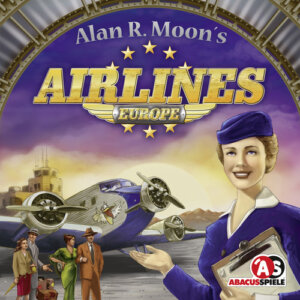 From ABACUSSPIELE and Rio Grande it’s the reimagining of Airlines as Airlines Europe by Alan Moon.

The age of passenger aviation has begun. Courageous entrepreneurs establish the first airlines and compete for the few available licenses in the European air space. The rapidly growing market and the chance for high gains attract high-powered investors. But only the ones that use their influence skillfully and their cash wisely will turn their investments into the most profitable airlines.

For 2-5 players ages 10 and up, Airlines Europe features many improvements over the original released in 1990.  Improvements include reduced play time and 112 small airplanes (Sweet).

You can pick up Airlines Europe at Noble Knight Games for $41.95.