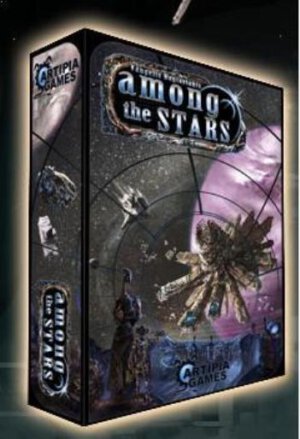 Among the Stars is a game from Artipia Games that is due to be released at Spiel 2012. You will be able to pre-order it on Indiegogo in the next few weeks, but are you interested? Here’s what we know:

After a devastating war, peace is declared among all the major races of the galaxy and an Alliance is created.

One of the first decisions of the newly formed Alliance, is to build massive space stations all along the galaxy in order to promote trade among the races, strengthen diplomatic relations and help protect the newly established peace.

Each player takes the role of one of those races, trying to build the best space station.

The players use a drafting mechanism to select location cards and place them on their station. According to where they place them they score victory points. The construction lasts 4 years (turns) and whoever has the most points after the 4th year, wins.

Not much to go on really, we’ll learn more once the campaign launches. I’m curious as to why they would use Indiegogo instead of Kickstarter. Regardless, it’s a sci-fi game so I’ll be keeping my eyes on it.