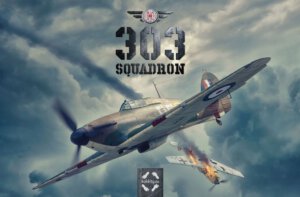 Newcomers Hobbity.eu are looking to bring a cooperative Battle of Britain wargame to the masses by way of Kickstarter. In 303 Squadron, player take on the roles of historical pilots as they defend England from waves of German bombers and escort fighters. The game is for one to four players, ages 10+, and plays in one to two hours. The project is around 40% funded and you can add support for the coregame and stretch goals at the $79.00 pledge level through December 21st.

I will admit, while 303 Squadron could be interesting, the video below really doesn’t do the project any favors as far as explaining much about the game because it seems the folks behind it were more concerned with playing WWII dress up as opposed to actually promoting the game…

303 Squadron is an intense, fast-paced board game that will push you and your plane to the limits. It is a 1-4 player experience, allowing you to play cooperatively or in a solo mode. The game is inspired by true events: players take the role of legendary pilots from the 303 Squadron, to experience epic dogfights against Luftwaffe pilots, and – most of all – to create unforgettable stories. This is the kind of game that sparks those “Remember the time when…” conversations.

The 303 Squadron was the most effective RAF squadron during the Battle of Britain.

We studied the history of actual squadron pilots and we try to recreate how they fought – and won – against the German invasion. Players take the role of the most famous pilots in the Squadron, including personality differences! These are true heroes who fought for our freedom and helped make “Our Finest Hour” come true.