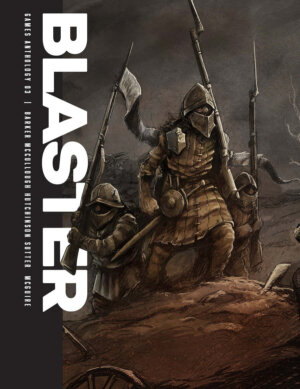 BLASTER Volume 3 has arrived and it not only includes a standalone miniatures game but also expands upon four established systems. Add more to your Frostgrave, Gaslands, This is Not a Test, Gamma Wolves, and other miniatures gaming with this new volume. The 122 page book is available in softcover for $34.99 or in PDF for 19.99 at DriveThruRPG.

Sludge is a complete and incredibly rich standalone game with the grit and depth that you’ve come to expect from BLASTER. Sean Sutter (Relicblade, Mystic Skies) has crafted a world that shows the deep tolls of war. Massive armies are on the march in an unceasing conflict that shadows over humanity, and even the environment, grinding it all down into a pulp. It is 52 pages of inglourious black powder plus gaming at its finest.

The worlds of Rangers of Shadow Deep and Frostgrave are being invaded from unfathomable horrors that their heroes can barely stand up against. Will you wield magic to defend against the darkest threat your world has seen? And at what cost are you willing to do so?

Earth gets an eviction notice from Mars, and becomes dismantled and reassembled into a progressively more chaotic post-post-apocalyptic world. Randomly generate an illegal build and get out of the factory fast before you become dismantled yourself. Unique LEGACY Gaslands rules, and five awesome narrative scenarios.

Truly unpredictable anomalies plague Site-X, a supplement for This is Not a Test. Will your quest for some of the rarest and powerful artifacts aid your survival or send your models flying across the board into a wall, or even being shred up into indiscernible viscera?

What is BLASTER?
What happens when five of wargaming’s most talented indie designers are teamed up with an incredible graphic artist?

The answer is a unique anthology project. New rules for your favourite indie titles. New games ripped right from the minds of wargaming’s most prolific collective of published writers and insights into the process of writing and creating games.