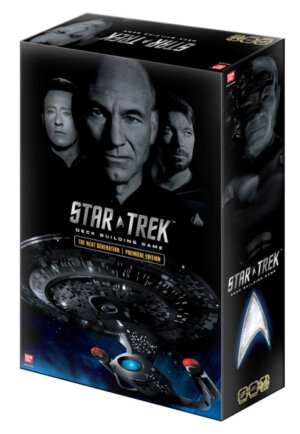 On the heels of their entrance into the deck building game market, with Resident Evil, Bandai is bringing Star Trek: The Next Generation Deck Building Game to store shelves. Just in time for Halloween you’ll be able to go where no deck building game has before with 300 cards representing characters, starships, situations, and more from the classic SF series.

The STAR TREK DBG brings the Star Trek: The Next Generation® universe to life in a game of strategy where players construct their card decks while they play. In the STAR TREK DBG you are the Captain of a small starship with a standard crew and basic weaponry. Will you use your crew’s experience to improve your ships systems or to recruit more experienced crewmen to your ship? Will you form diplomatic relationships or conquer civilizations in battle? Build your deck and explore the Star Trek universe!

Plans are for the game are to consist of 300 playing cards plus other accessories that will create a countless number of possible scenarios for unlimited replay value. No two games will ever be the same!