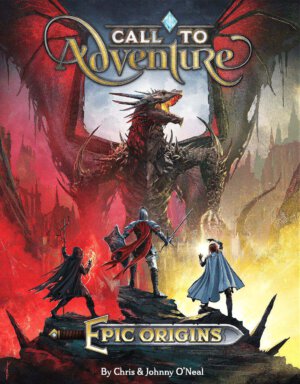 Brotherwise Games will be releasing Call to Adventure: Epic Origins this summer. Built on the core systems of the original CtA game, this new edition features a high fantasy theme and new mechanics. The game is for one to four players, ages 13+, plays in 30 to 60 minutes, and will carry an MSRP $44.95 of when it arrives August 24th.

In this hero-crafting card game, 1-4 players compete to earn the highest Destiny score while cooperating to defeat the Adversary. Like the original Call To Adventure, Epic Origins is a tableau-building game where players draft cards, cast runes, and overcome challenges to score victory points.

For players familiar with Call To Adventure game system, Epic Origins introduces a high fantasy theme inspired by classic dungeon-crawling RPGs. The new Heritage card type provides options like Elf, Halfling, and Dwarf. Class cards allow you to invest Experience to “level up” your character. High fantasy themes and challenges can be found throughout the game’s 150+ unique cards.

While points decide the winner of the game, Call To Adventure encourages storytelling at the end of the game. Epic Origins also includes a guide for converting your final tableau into a 5th Edition D&D character.