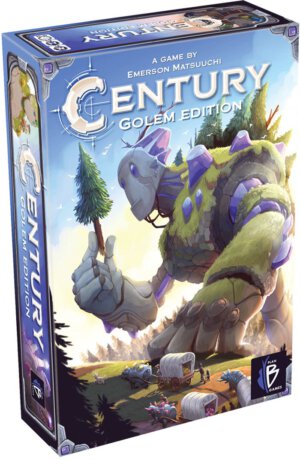 Previously only available from Plan B Games directly, Century: Golem Edition will be making its way to retailers in a few months. Based on the hit Century: Spice Road, the Golem edition changes the setting and components of the game as players are merchants creating a network to create the giant creatures with crystals. The game is for two to five players, ages 8+, plays in around 30-45 minutes, and will carry an MSRP of $39.99.

“Papa, where do crystal golems come from?” “The great masters craft them using soul crystals.” “Oh… but where do soul crystals come from?” “From all over the world. They are very rare.
Legend says, they are the souls of people who died
long before the first humans came to Carvania.” “Well, when I grow up, I’m going to be a crystal trader!
I’ll travel the whole world and I’ll find the very best
crystals and the masters will make great big
powerful golems from them, like the Gatekeeper!”

Centuries have passed since the first humans arrived on Caravania.  Legends have been shared from one generation to the next explaining Caravania’s most exotic and rare mysteries – the soul crystals.  Legend has it that the souls of the planet’s original inhabitants were so pure that after death they were preserved as mesmerizing and powerful crystals.  Simply holding a soul crystal, one could feel the essence of life radiating from deep inside.  It wasn’t long after the discovery of the soul crystals’ power that humans used them to build and activate towering golems.  After many forgotten centuries, those pure souls are able to breath life once again.  In Century: Golem edition, players serve as traders attempting to collect crystals to create the most ornate and powerful of golems.

The Village: Big Box to Arrive in Early 2023 from Plan B Games

Pathfinder: Secrets of Magic Reviewed on The Gaming Gang Dispatch #691