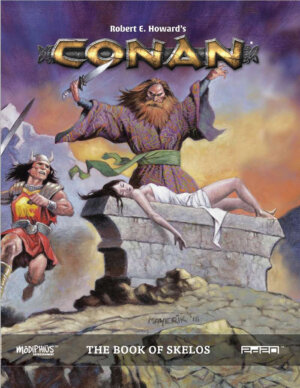 If you’re a fan of the hot selling Modiphius Entertainment roleplaying game Conan: Adventures in an Age Undreamed Of then you’ll be pleased to know you’ll be able to delve further into Hyborean Age sorcery as The Book of Skelos is now in print. This supplement is jam packed with new archetypes, spells, skills, and more. The 112 page book is available as a hardcover and PDF bundle for $28.40 or just the PDF through DriveThruRPG for $14.19.

The Book of Skelos delves into the deepest mysteries of sorcery in the Hyborian Age, dramatically expanding the rules for sorcery and all things magical for gamemaster and player characters alike.

Included within these pages are rules and guidelines on handling player character and non-player character sorcerers, the usages of sorcery in campaigns, a host of magic items, creatures of the Outer Dark, and new skills and techniques to bolster any sorcerer’s repertoire.

So, don your wards and charms, step inside your circle of protection, and read these accursed pages!

New skills and techniques such as necromancy, mesmerism, mummery, herbalism, human sacrifi ce, and astrology, to equip your sorcerer player characters and foes alike with a wide range of techniques and tactics.

New spells and alchemical enchantments, from Artifice of Yag to Visions of Exalted Wisdom.

Artifacts such as the Heart of Ahriman and the Serpent Ring of Set, including a host of strange devices, ancient technologies, and weird scientific oddities from a forgotten era.

New types of exalted sorcery, like rituals and great workings such as Rend the Earth’s Bones and Opening the Gateway Between, to bring terror to the world!

Expansive rules for creating and fostering sorcerous cabals, pitting them against one another, and using them to pursue goals both diabolical and deadly.

A history of sorcery spanning from the dawn of time through the Cataclysm, into the Hyborian Age. Thrill to tales of prehuman civilizations and their greatest secrets!

Developed with leading Conan scholars, this is the darkest sorcery of the Hyborian Age revealed at last, as Howard created it!