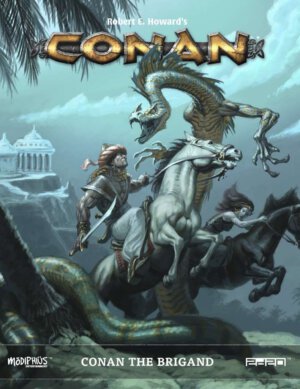 A new sourcebook has arrived, from Modiphius Entertainment, for Robert E. Howard’s Conan Adventure in an Age Undreamed Of and this time out we dive into the Cimmerian’s days as an outlaw. Conan: The Brigand is packed with plenty of new material to bring to the gaming table for campaigns featuring nomadic tribes and daring deeds in the desert. The 120 page sourcebook is available in PDF at DriveThruRPG for $14.99.

Welcome to life outside the law!

BUT NOT ALL MEN SEEK REST AND PEACE; SOME ARE BORN WITH THE SPIRIT OF THE STORM IN THEIR BLOOD, RESTLESS HARBINGERS OF VIOLENCE AND BLOODSHED, KNOWING NO OTHER PATH

Conan the Brigand is the complete guide to the nomadic brigands of the Hyborian Age, providing the gamemaster and player characters with all the resources to run campaigns that embrace the path of the brigand, or are affected by it. Here within these pages are all the resources needed to bring to life this outlaw world!

New material to expand your Conan campaign, with brigand-themed castes, stories, backgrounds, and equipment, allowing you to create your own unique brigands, nomads, and raiders.