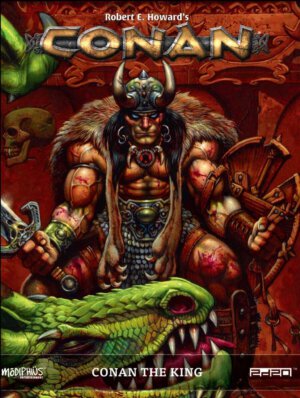 Modiphius Entertainment has been hard at work with their RPG line up for Robert E. Howard’s Conan: Adventures in an Age Undreamed Of and the latest sourcebook has arrived. Conan The King features everything Game Masters and players need to embark on Hyborian adventure during the era when Conan ruled Aquilonia. The 114 page PDF is available at DriveThruRPG for $14.99.

Welcome to the throne!

WHEN I WAS A FIGHTING-MAN, THE KETTLE-DRUMS THEY BEAT, THE PEOPLE SCATTERED GOLD-DUST BEFORE MY HORSE’S FEET; BUT NOW I AM A GREAT KING, THE PEOPLE HOUND MY TRACKWITH POISON IN MY WINE-CUP, AND DAGGERS AT MY BACK.

Just as Conan’s ultimate destiny was to claim the throne of Aquilonia, the crown jewel of the Hyborian civilizations, Conan the King is the ultimate sourcebook to those kingdoms and the most dangerous battlefield of all: that of the court. With the guidelines contained within this book, players may fight to earn thrones of their own… or die trying.