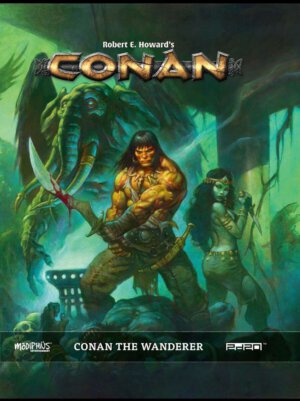 Modiphius Entertainment has released the latest supplement for the hit Conan: Adventures in an Age Undreamed Of roleplaying game. In Conan The Wanderer, players and game masters will be able to experience areas of the Hyborian world which were little explored by the Cimmerian hero. The 120 page PDF is available at DriveThruRPG for $15.00.

Welcome to the mysterious East!

DANGER BREEDS CAUTION, AND ONLY A WARY MAN LIVES LONG IN THAT WILD COUNTRY WHERE THE HOT VENDHYAN PLAINS MEET THE CRAGS OF THE HIMELIANS. AN HOUR’S RIDE WESTWARD OR NORTHWARD AND ONE CROSSED THE BORDER AND WAS AMONG THE HILLS WHERE MEN LIVED BY THE LAW OF THE KNIFE.

Conan the Wanderer is an essential guide to the exotic kingdoms of the East, a land barely explored by Conan during his illustrious lifetime. Nowhere in the Hyborian world is such a rich and varied array of countries, ranging from the rocky hills of Afghulistan, to the untamed steppes of Hyrkania, to the steaming jungles of Khitai, to the opulent palaces of old Vendhya.