Victory Point Games has a new two player title releasing today which tackles the war which eventually gained Cuba its independence from Spain. Cuba: The Splendid Little War looks to be a low to moderate complexity wargame with a card driven narrative. No final pricing or box image are currently available but VPG has indicated you’ll be able to order the title as of today.

Cuba: The Splendid Little War, from designer Javier Garcia de Gabiola, is a two-player simulation of the third War of Cuban Independence (1895-1898). One player controls the forces of the Spanish colonial government, fighting to retain Cuba; the other player controls the Cuban rebels fighting for their independence. Gameplay represents the main insurgency and counterinsurgency operations that took place, and players must make key strategic decisions to achieve their objectives while balancing their resources and preventing their opponent from doing the same.

There are event cards that help and hinder both players; disease, ambushes, assassinations, and the reactions of the American press and government. Steamships, railroads, telegraphs were all common, but there were no radios, almost no automobiles, and no airplanes. Newspapers and magazines were the cutting edge of media, so print was “king.”

As the Spanish player, can you maintain control of the island, keep the economy going (based on sugarcane plantations) and keep the U.S. out of the fight? Or, as the Cubans, can you stop the Spanish efforts and gain your independence.? Play Cuba: The Splendid Little War and find out! 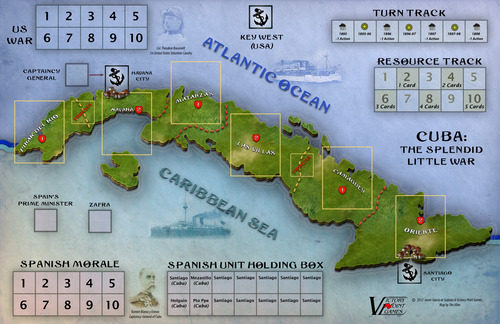