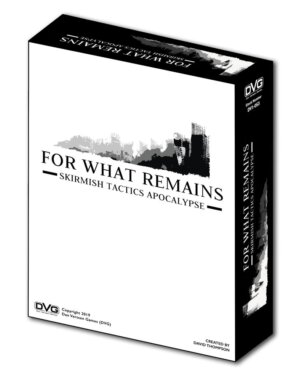 Yesterday afternoon Dan Verssen Games launched their latest Kickstarter and this new project aims to bring a game of post-apocalyptic tactical warfare to your table. In For What Remains, players will vie for control of the ruins of a near future Earth against the mysterious underworld dwellers of the Netherscape. The game is for one or two players, ages 14+, and plays in around 30-45 minutes per scenario. You can reserve the core game for a $55.00 pledge or the core game and all four planned expansions for a $200.00 pledge through May 22. For What Remains is already past the 70% funding level in its first hours and expected delivery for the core game is November of this year.

On 19 September 1957, a nuclear weapon was detonated 275 meters below ground at the Nevada Test Site in the United States. This test opened a gateway to the Netherscape, an alternate dimension more commonly referred to as the Basement. In 2013, North Korea made contact and formed an alliance with a powerful cabal of Nethermancers who ruled over large swaths of the Basement. Nations across the world came together to battle the threat, 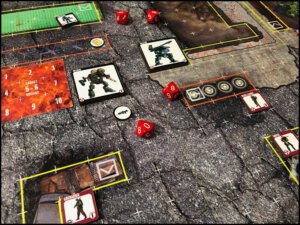 and resorted to using nuclear weapons to defeat the otherworldly creatures. While almost all the gates to the Basement were closed, most of Earth and mankind was destroyed. The year is 2035. The remnants of humanity fight among themselves, struggling to emerge as the victors in a desperate fight for survival.

For What Remains is a skirmish-level wargame set in a post-apocalyptic near future.

For What Remains is a two-player competitive game, or it can be played solitaire.

There are two ways to play For What Remains: skirmishes and campaigns. Skirmishes are stand-alone games played for a single victory, with no lasting repercussions. Campaigns are a series of skirmishes linked together to form a larger narrative.