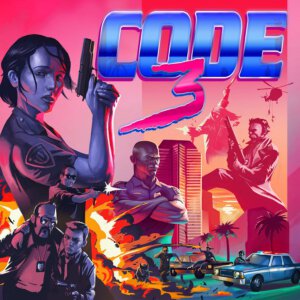 A game promising plenty of 1980’s buddy cop movie action and adventure is arriving soon and has really caught my eye. In Code 3, from Black Key Games, you combine two decks representing famous movie archetypes to create your crime fighting team, aiming to take down the big bads and make the streets of the city safe once again. The cooperative game is for two to four players, ages 13+, plays in around 45 minutes to two hours, and will carry an MSRP of $60.00 when it arrives in Q2 2020. Right now there is still a pledge manager open which allows you to score the core game, and other expansion goodies, for $50.00.

Code 3 is a cooperative, story-driven, 80s-themed crime fighting game. Can you save your city from badly-named mob bosses, fear-inducing serial killers, a rising crime rate, and a police Chief that isn’t always your friend? These officers may have 99 problems, but crime ain’t one.

Code 3’s cooperative scenarios challenge players to complete goals and make choices before revealing the next part of a branching story arc. Of course, mob bosses aren’t the only thing hindering our officers, as 911 calls spread like wildfire about your city. If too many 911 calls go unanswered… the game is lost.

Customize your crime fighting duo by selecting two officers (out of hundreds of officer combinations), each with their own unique deck, which are then shuffled together to create your “Beat Partners” deck.

You can tailor your Beat Partners deck to answer 911 calls quickly, to investigate for witnesses and evidence, to complete scenario objectives, or even move your beat cops into position to help your allies. There are hundreds of character combinations that you can experiment with, and finding the best two cops (or canines!) is key to your team’s victory!

Most importantly, Code 3 gives players the opportunity to handle things by the book… or play just outside the rules. However, if players choose to step outside the Police Department’s Code of Conduct then the Internal Affairs Division starts investigating them. Players then shuffle “IA Heat” cards into their deck, and if two are ever drawn on the same turn, those players must immediately proceed to a contentious “Internal Affairs Interview.” Unfortunately, this prevents players from hitting the street and handling those 911 calls. Your teammates can help you during the IA Interview by vouching for you… but at what cost? Are they willing to put their reputation on the line for you? Are they willing to risk their own IA Interview?

Code-3 is a sand box of 80’s cop action. Do you love rolling dice? Do you love pushing your luck? Do you love unraveling the story? The meta-game? Helping the team? Being in charge? And… do you do it by the book? Find out now! 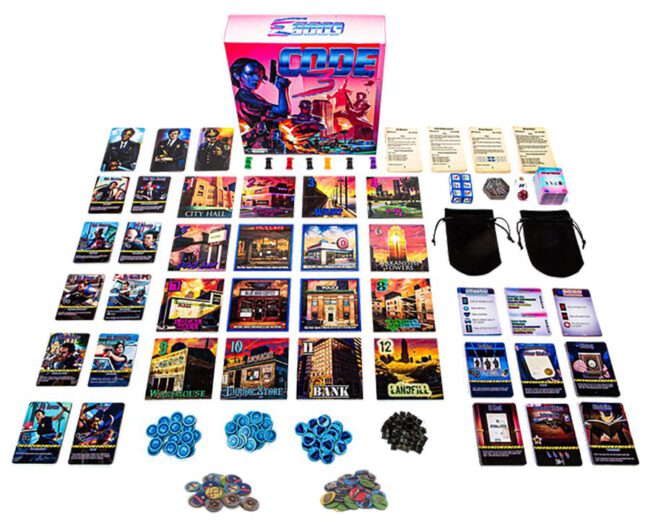