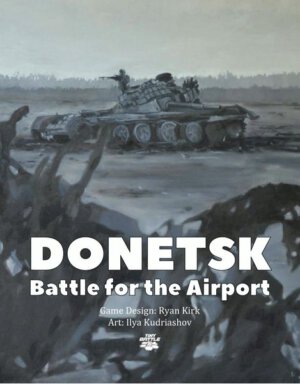 Tiny Battle Publishing is currently taking preorders for the modern Ukrainian focused wargame Donetsk – Battle for the Airport. In the game players will battle over the critical strategic location as each leads either the Ukranian loyalists or the Russian backed separatists. Donetsk – Battle for the Airport is for two players and you can preorder right now for $24.00, with an eventual MSRP of $28.00. The title is expected to ship later this month.

A rebadging of the game originally found in Flying Pig Games’ Yaah! #9. Donetsk is a squad-level tactical game that simulates the battles for the Donetsk Airport in the Ukraine 2014-2015. You will control squads, RPG and machine gun teams, BTRs, T-64 tanks, snipers and more, as you attempt to gain control of the airport. The game comes with four scenarios, 88 sharp-looking die-cut counters, and a beautifully illustrated game map. Ryan writes excellent designer notes that will educate those who were unaware of the Russian-backed separatist’s war with the Ukraine.