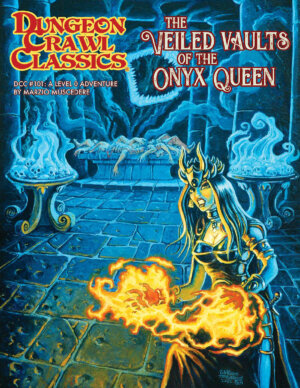 Goodman Games has released the latest adventure for Dungeon Crawl Classics. Players will embark on a 0 level funnel in The Veiled Vaults of the Onyx Queen. You can score the 26 page softcover (with PDF) for $9.99 or get the PDF alone at DriveThruRPG for $6.99.

A Level 0 Adventure for DCC RPG

The Queen’s Onyx Jubilee is set to begin, marking the 95th year of the merciful monarch’s glorious reign. While the entire realm celebrates the good fortune of their long-lived sovereign, a group of common villagers fights to stay alive. For them, the festivities have become a nightmare, as the sounds of revelry are replaced by screams of terror – their own!

Imprisoned in opulence, marked for death, hunted by creatures both grotesque and foul. This ragtag group of unsuspecting villagers must band together to brave the vile mysteries that haunt this place and stand defiant in the face of death itself – if they hope to escape the Veiled Vaults of the Onyx Queen and save their very souls!

This 0-level adventure funnel begins in media res with the characters awakening deep within an opulent palace where they are set to become unwitting sacrifices to the corpse-god Mordiggian.  There they must piece together the clues as to their whereabouts, contend with a ghoulish death cult, stop a vile sacrament, close a gate to the underworld, and ultimately confront the Corpse-God himself – if they want to escape the Charnel Palace and save their very souls.