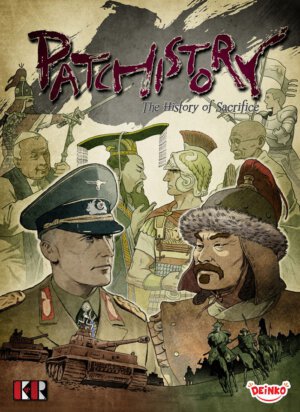 Here’s an upcoming title which sounds interesting: Patchistory for Sunkite Publishing. Designed by Yeon-Min Jung and Jun-Hyup Kim, Patchistory (originally published by Korean based Deinko Games) is a card game in which two to four players utilize different historical heroes and wonders in order to create the most powerful civilization throughout three eras. No word yet on pricing but the target for release is May 2014.

On a side note, there’s currently no official website for Sunkite and I have to say I’m usually left scratching my head at companies who seemingly can’t invest $20-$30 to create a site but rather use Facebook or Twitter as their point of contact. As with any sort of company, the lack of an official website tends to give buyers pause as to the legitimacy of the company. I don’t mean this as a critique of Sunkite but simply an observation that the new game publisher should probably put together a web presence if they want their initial release to be as successful as possible…

StuntKite Publishing is proud to announce our partnership with Deinko Games to bring you the English, North American release of Patchistory.

Patchistory is one of the most highly anticipated games to come out of Spiel Essen 2013. Deinko Games brought 50 units of the early English version with them to Germany and they sold out before the show even began! And judging by the reviews, those lucky few are completely hooked on this amazing new game.

Patchistory is a Civ-building game played across three eras in which 2-4 players bid for new Heroes, Wonders, and General Buildings to add to their burgeoning empires. Players must “Patch” these tiles to their existing tableau following specific rules. The goal is to generate the most culture by the end of the game; but to do that players must manage their resource output, military strength, economy, and diplomatic alliances.

We are currently editing the game and expect a May 2014 release.

StuntKite Publishing, based out of Seattle, WA, is a new board game publisher. Patchistory is our first release, and we have a number of exciting new titles in the pipeline. Please follow us on Facebook and Twitter to keep up to date on Patchistory and all of our upcoming titles.