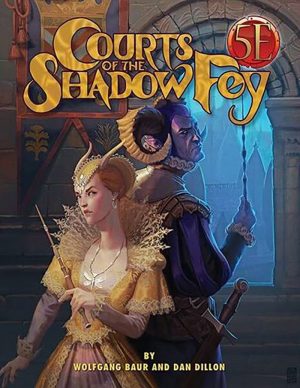 The popular Kobold Press Courts of the Shadow Fey sourcebook will be arriving for Dungeons & Dragons 5E this February. Within you’ll find a full length adventure, plenty of NPCs, new rule options, and a slew of never before seen monsters. The book should clock in around 130 pages (about the length of the 4E/Pathfinder editions) and will carry an MSRP of $24.99 when it arrives on February 27th.

The Shadow Fey have arrived and turned the city upside down! Then, their ambassador demands that the player characters explain themselves for interfering in a legitimate assassination! So begins the looking-glass adventure that takes 8th-to-10th-level adventurers into the Realm of Shadows.

This inventive, fully-detailed take on courtly combat and sandbox roleplaying, includes more than 100 NPCs, a map with more than 60 locations of the Courts, and more than 40 combat and roleplaying encounters. There’s even a new Status system to track player character prestige—and new Status powers, plus a quick-play dueling system to settle courtly disputes.

It also features dozens of new monsters your players have never seen, including demon lovers and dangerous liaisons, for those who seek them, jealous rivals, and the King and Queen of Shadows.