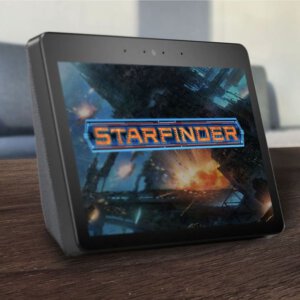 The conclusion of the Starfinder adventure for Alexa has arrived from Paizo Inc. Wrapping up the tale, which began with the free-to-play pilot episode in December 2019, are the final three episodes which are available through a variety of Amazon devices. Each episode can be downloaded for $1.99 or score the entire run for $9.99.

The second half of Starfinder is available starting today, featuring three brand-new episodes. The Starfinder skill for Alexa is a multi-part interactive audio adventure game that transports players to a futuristic science-fantasy world where they can make decisions to advance and influence the outcome of the story just by using their voice. By simply saying “Alexa, play the Starfinder game,” customers can play one of the most captivating audio games available on Alexa-enabled devices today. According to Amazon, users have played nearly 2 million minutes of Starfinder, making it one of the most popular Alexa skills this year.

Paizo, the team responsible for the popular Starfinder tabletop game, and Amazon collaborated to reimagine the game for Alexa. The free-to-play pilot episode of Starfinder, “Scoundrels in the Spike,” debuted in December 2019, and episodes 1 to 3 were launched on August 4, 2020 to much fanfare.

For players looking to continue the adventure outside Alexa, the Starfinder Beginner Box can now be purchased from within the skill. With streamlined rules, this deluxe boxed set includes everything needed to explore the futuristic tabletop RPG setting. In celebration of launch, players who purchase the Beginner Box in-game will receive their first episode free.

The full season of Starfinder is now available in the United States and the United Kingdom on Alexa-enabled devices, including Amazon Echo, Fire TV, and the Alexa mobile app: players have numerous access points to the game and can resume playing whenever, wherever. The pilot is free to play, and customers can purchase each episode for $1.99 or the full season for $9.99.