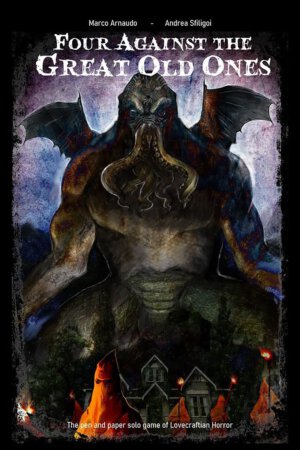 Ganesha Games has released Four Against the Great Old Ones. The popular solitaire roleplaying game series now tackles the Cthulhu Mythos as players will look to defeat one of six Lovecraftian menaces. The 82 page PDF is available at DriveThruRPG for $9.99.

The clock is ticking!

Forty days from now, a dark cult will congregate somewhere in the United States to summon a cosmic entity of infinite horror! The only hope for the world is a group of four intrepid investigators who will stop at nothing to find the necessary clues, identify the cult, and stop the great ritual before it is too late!

Four against the Great Old Ones is a game of Lovecraftian dread and horror set in the 1930s. It is an old-school pen-and-paper game that can be enjoyed in solitaire, cooperatively, or as an RPG-lite.

It is a standalone game based on the Four against Darkness system, modified to include Insanity, Helpers, 8 new main characters, a unique clue system, 6 possible final encounters (each a full mini-game), and more.

Narrative-driven and true to its sources, Four against the Great Old Ones will provide you with a deep immersion in Lovecraft’s world. The game is designed to be challenging, and will require determination, bravery, skill, and favorable astral alignments to win.

Do you dare to pursue this dangerous investigation?

Do you dare to face the Great Old Ones?

Written by Marco Arnaudo, with illustrations by Andrea Sfiligoi and many others.