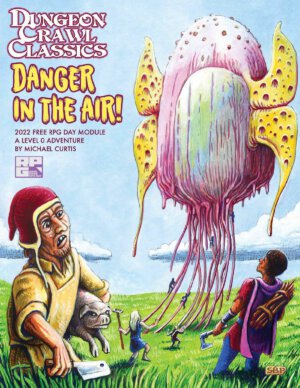 The most recent Free RPG Day adventure for Dungeon Crawl Classics has arrived in PDF from Goodman Games. Written by Michael Curtis, Danger in the Air is a 0 level funnel in which the adventurers explore a giant floating alien jellyfish. The 18 page PDF is available at DriveThruRPG for $6.99.

Danger in the Air is a 0-level funnel for the Dungeon Crawl Classics RPG.

During the course of this adventure, a group of modest villagers discover a strange creature floating over their home: an immense, winged jellyfish-like monster with a structure lodged inside its transparent bell. Treasure is leaking from the damaged construction, and the creature itself appears dead. Will the bravest (or most foolish) of the villagers enter the beast to see what else lurks in the curious building situated within the great, floating corpse?

Danger in the Air is intended for groups of four to six players, with each player controlling three to four 0-level PCs. Many will die during the adventure, but those who survive will find themselves ready to face further adventures as stalwart 1st level characters. The adventure may also be suitable for 1st level characters, but the judge might wish to increase the difficulty of some of the encounters to better challenge the more robust and gifted player characters.