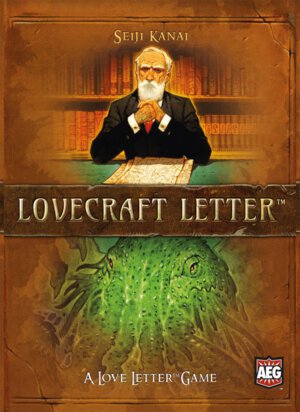 Playing Time: Around five to ten minutes per round; a complete game in around 45 minutes

I have to begin my review of Lovecraft Letter by pointing out the original Love Letter is a big hit with my cadre of gamers, especially my nephew Cameron and his friends. We’ve introduced a good half dozen of Cam’s non table top gaming pals to the hit AEG title and it’s been common place for me to be stopping by to visit my brother and his family only to eventually hear, “Hey uncle Jeff! Do you have Love Letter with?” come ringing up the stairs from the furnished basement below. An interesting side note is the Playstation 4 always happens to be on downstairs when that question comes bounding along.

Since I also happen to be a fan of near all things Mythos related, my interest was especially piqued when AEG announced Lovecraft Letter. I was also mighty curious how Seiji Kanai 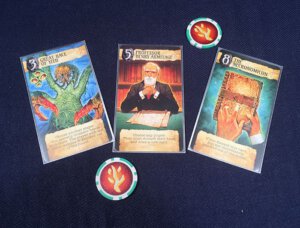 would fold various Lovecraftian tropes and themes into the core gameplay of Love Letter too. Now that I’ve had an opportunity to get the game to the table multiple times, with a variety of different gamers, I’m happy to say this Lovecraftian twist on Love Letter is loads of fun.

If you’ve had a chance to watch the unboxing video above, you’ve already seen the production quality of Lovecraft Letter is top notch. From the tarot sized cards to the cool poker chips to the artwork throughout, AEG has really given the game a deluxe treatment. Granted, the MSRP of Lovecraft Letter is about three times that of the standard boxed edition of Love Letter but looking at the everything you get, as well as the excellent presentation, the price seems fair.

Rather than me just regurgitating the rules of Lovecraft Letter, feel free to check out the PDF right here if you’re interested in the nitty gritty.

Whereas the object of Love Letter was to manipulate your way to winning the hand of a princess, in Lovecraft Letter each of the players are trying to amass forbidden secrets mankind was not meant to know. All while eliminating your rivals along the way, of course. The game’s backstory actually involves a search for a missing cousin in Egypt but we thought that was a bit silly; all six players are trying to find a cousin? Are we talking about the same missing relative? Everyone has a missing relative? Who knows? I have to admit we sort of ditched that premise and approached the game as if we were each trying to unearth hidden Mythos secrets. 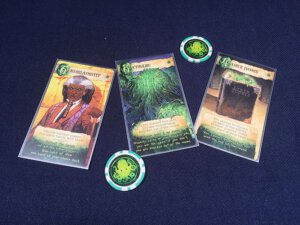 For those unfamiliar with the gameplay of Love Letter titles, the breakdown for the most part is drawing a card and playing a card. The object of each round is to either be the last standing (so to speak) after all the other players have been eliminated or possessing the highest value card in hand if more than one person remains, thus winning the round. You continue to repeat the process until one person has won enough rounds to be declared the victor. Cleverly using the abilities of the cards and deducing what cards other players have in hand are the main keys to achieving the win. Even though there is player elimination, this never becomes much of an issue because the rounds play out so quickly no one ousted spends too much time just twiddling their thumbs.

Lovecraft Letter adds some mighty interesting wrinkles to the established Love Letter format, not the least of which is the insanity mechanic. The original game contained sixteen cards with specific abilities and you would use these to not only take out the other players but to also try to hold a high enough value card in hand if the round came to a showdown of comparing values. Regardless of how you’d approach each round, each card only had one ability. In Lovecraft Letter the card count has been increased to twenty four (plus a Mi-Go brain case card) and some cards actually allow a player to choose one of two effects: sane or insane.

Once a player discards a card with an insane effect that player is now considered to have delved too deeply into the Mythos and gone insane. From that point on whenever that player discards a card with both a sane and insane option they may choose the insane effects. The insane options are always more powerful but they also come at a price since the player is much more likely to be knocked out of the round; prior to drawing their next card, the insane player must reveal a number of cards from the deck equal to the number of insane cards discarded in front of them. If they reveal another card with an insanity 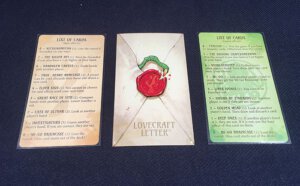 option they’re eliminated from the round. This insanity mechanic adds a new level of strategy which I enjoyed a ton since you have to really weigh your options as far as how much you want to risk in order to play the more powerful options. You also want to keep in mind winning the overall game is easier if you win rounds while staying sane as opposed to insane and the dual sided poker chips are used to track each.

I also want to mention the Mi-Go brain case card which begins each round out of the deck. This is a fun little nod to one of my favorite Lovecraft tales, The Whisperer in Darkness, where a player can discard the Mi-Go card and force another player to give them their hand and have to take the brain case card. Effectively, the target player’s brain has been carted off to Yuggoth and now they’re stuck with a zero value card which will automatically lose them the round if it’s discarded. A solidly nasty “take that” indeed!

Normally, Lovecraft Letter continues until one player has won two rounds while sane or three rounds while insane. These victory conditions remain constant regardless of the number of players. Yet, this wouldn’t be a Mythos game if Cthulhu didn’t get some top billing! There is an overall victory condition, regardless of the number of rounds any of the players have previously taken down, where discarding the Cthulhu card while having two or more insanity cards already in your discards nets you total victory. Honestly, this is a lot tougher to pull off than it sounds. 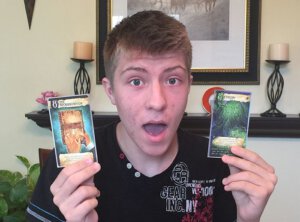 With all the additional wrinkles to play and extra cards most readers will probably think a game of Lovecraft Letter demands a longer time commitment than other Love Letter games. Truthfully, I found playing to completion took about the same amount of time and actually maybe a tad quicker to get in a full game. The reasons behind this are due to how players can be eliminated from a round by way of the insanity mechanic and/or the new knockout effects of some of the cards. Even with the additional options available on some of the cards, I didn’t find anyone having to overthink their card play once we had a couple of rounds under our belts.

I have to say, without a doubt, Lovecraft Letter is my favorite title in the Love Letter line up. Seiji Kanai has done a marvelous job meshing a solid Lovecraftian feel to the proceedings and the game never feels as if we’re watching a designer flogging a dead horse in order to squeeze every last ducat out of a gamer’s pocket. I’m sure some prospective buyers might balk at the MSRP, considering you can buy the basic Love Letter online for around ten bucks, but I personally think the extra polish Lovecraft Letter receives is well worth the price. I have to say Lovecraft Letter has quickly replaced the original as what Cameron and his friends’ are clamoring to play whenever I stop by. In other words, if you’re a fan of previous entries in the series – and dig the Cthulhu Mythos – then Lovecraft Letter is seriously a must buy. If you haven’t played any of the Love Letter titles and want to give the series a shot? Go grab this game!

Review 0
10 TGG SCORE
0 VISITORS' SCORE (0 votes)
Summary
Lovecraft Letter hits on all cylinders and is my favorite release in the Love Letter line. The production quality is top notch, the gameplay fast and furiously fun, and the theme is nicely meshed into the proceedings. The new additions and mechanics truly make Lovecraft Letter unique.
REVIEW SCORE
What people say... Leave your rating
Sort by: