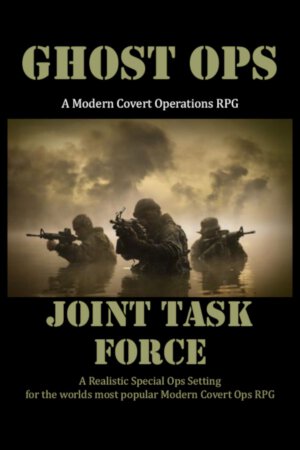 The latest supplement for the modern era RPG Ghost Ops, From Feral Gamers Inc, is now available in PDF. Joint Task Force provides a more focused realistic presentation featuring US Special Operations Forces. You can score the 146 page PDF at DriveThruRPG for $12.99.

Emblazoned on the coat of arms of President George Washington, and carried now on the unit insignia of the Joint Special Operations Feasibility Studies Group, also known as Joint Task Force Chimera. The men and women selected to take part in JTF- Chimera are expected to live that creed, not to just do what needs to be done, but to be willing to sacrifice whatever it takes for mission accomplishment.

JTF is a setting for the Ghost Ops Modern Day Covert Ops RPG; taking the multinational ICO of the original and replacing it with a more focused view of military special operations. This book contains:

New Backgrounds and Packages: based on real-world US Special Operations Forces.

A Streamlined Armory and Motorpool: consisting of a selection of what members of SOCOM would field.

A Reputation Point System: replacing dollars with the only currency Operators truly care about, respect.

A Replacement of the Safehouse Mechanic: offering a more “militarized” version.

A slew of Optional Rules: allowing you to customize the difficulty and realism of your game experience.

Operation Viper Blue: a short, dynamic campaign intended to prepare both Game Master and Player alike to the changes in the Feral System.

Take on the challenge of bringing up a new SOCOM unit from conception to Tier One status, or take on the roles of your favourite Delta Force or DEVGRU operators as they separate the wheat from the chaff on the modern battlefield. JTF is intended to complement Ghost Ops Core for those seeking a more military setting.