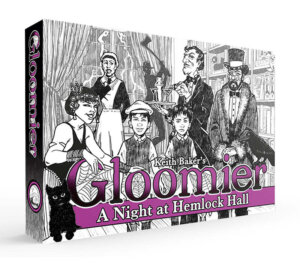 Only hours remain to back Keith Baker’s Gloomier: A Night at Hemlock Hall from Atlas Games. The game builds on the mechanics established in Gloom but expands greatly on the storytelling aspects. The Kickstarter campaign is over 3000% funded and you can reserve a copy of the core game for a $24.00 pledge. Or get the additional Glom Grief Case, along with the game, for a $49.00 pledge. The project ends April 8th with an expected delivery this October.

The sky is darker, the tea is colder, and the worst is still to come…

Misery and mysteries abound at Hemlock Hall, the imposing estate of Lord Wellington-Smythe and his eccentric family of misfits. When you’re invited inside for an evening’s entertainment, what could possibly go wrong? Will you Cuddle with Cats or Thwart a Thief? Will you Brawl Over Brandy or Fall Prey to the Plague? At Hemlock Hall, awful amusements become deadly diversions with the flip of a card.

Gloomier: A Night at Hemlock Hall is a darkly humorous stand-alone competitive storytelling card game for two to five players. To win, you make your characters suffer the greatest tragedies possible before passing on to the well-deserved respite of death.  The player with the most negative score wins. And in Gloomier, the winner gets the final word: Who was the murderer? How did the heist end? You decide!

Gloomier features transparent plastic cards, allowing a character’s score — and story — to evolve as cards are stacked on top of each other. You don’t need prior experience to play Gloomier, but Gloom fans will find that A Night at Hemlock Hall expands the storytelling aspect of Gloom with new, specially-designed story prompts. And this full stand-alone game includes 6 new Stories and 14 new Guests that can be used with any edition of Gloom. So dare to enter Hemlock Hall, and see what delightful disaster awaits!