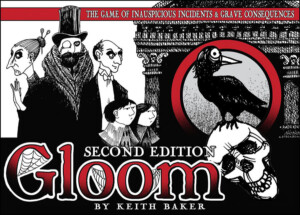 Gloom is printed on transparent plastic cards so you can see through them, Cool. It is unique and pretty neat. The entire game consists of 110 of these cards. Each player is given a family which consists of five family members. The entire goal of the game is to make your family members as miserable as possible, then kill them off one by one when they are unhappiest. The player whose happiness score has the lowest total after adding up the scores of his family members wins. 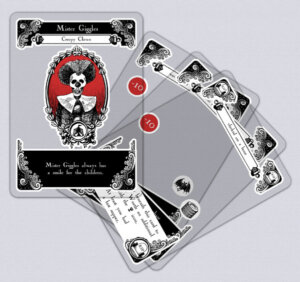 If you want to have a good (bad?) time, the rules suggest that you make up stories for each of the family members as you play cards on them. For example, If you play the Was Plagued by the Pox card on Uncle Mortimer, you could say that Uncle Mortimer was walking along when he slipped and fell into the sewer, where rats gnawed at him before he managed to escape. Then someone plays “Was Married Magnificently” card on him and describes how a nurse in the hospital took pity upon him as he was healing and fell in love with him. It does add some fun if you are playing with a group that enjoys that kind of stuff.

There is a lot of screw your neighbor action in the game, actually that is half the fun. Make somebody less unhappy, then kill them off. Hee!

The artwork on the cards is great, very Edward Gorey inspired. The families are reminiscent of the Addams Family, and the whole game is black humored gloomy fun. Unfortunately, the box doesn’t hold the cards very well. You’ll probably want to get your own card box. Additionally, these cards can get scratched, since they are see-through plastic. The fonts are small, so this game isn’t for those who have trouble reading cards. I have not had any problems with the ink flaking off the cards, as I have heard mentioned elsewhere. I believe that particular problem might have been solved in the current printing, but I have no way of knowing.

There are several expansions to the game. I have not played any, but the main concern I hear is that the new cards have no markings on them to distinguish them from the original cards. So unless you use a card list to separate the expansions back out after using them, you’ll be keeping them all in one big deck. The expansions do add the option to have more players, up to seven now.

TGG REVIEW
6.5 TGG SCORE
0 VISITORS' SCORE (0 votes)
Summary
Gloom is printed on transparent plastic cards so you can see through them, Cool. It is unique and pretty neat. There is a lot of screw your neighbor action in the game and, actually, that's really half the fun. Make somebody less unhappy, then kill them off. Hee!
REVIEW SCORE
What people say... Leave your rating
Sort by: