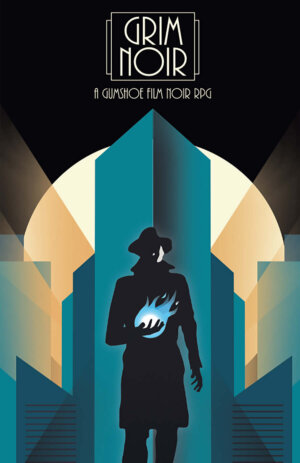 An interesting looking new RPG from Northern Realms has arrived at DriveThruRPG. Utilizing the Gumshoe system, Grim Noir promises cinematic horror investigation and noirish styled tales. The 208 page book is available in hardcover for $39.99 or in PDF for $19.99.

Grim Noir is a film noir RPG about occult mysteries and shady deals in dark alleys and glamorous restaurants. In Grim Noir you take on the role of a group of detectives that gather clues in order to piece together a solution to the mystery your game master has created. In Grim Noir mysteries have a supernatural or an occult twist that makes them too dangerous for the City’s regular police. But not for you. You are are a Reaper.

Take on the role of Reapers, people who have a special ability to see and take hold of souls. You can use this ability to gather clues from the dead or to sell the souls you gather for money, favors or supernatural abilities. This will be both your strength and weakness. The power you gain through dealing souls will let you solve the dangerous cases you come across but seeing the supernatural can strain your sanity. Can you balance between your normal life and the life of Reaper?

A GUMSHOE system with a film noir twist

The renowned GUMSHOE system is designed for playing investigative roleplaying games, allowing the players to focus on the story, rather than worry about whether their characters can find the clues to advance the plot. Grim Noir uses this established rules system and builds on top of it some new mechanics that are specifically made for this game. The GUMSHOE system is rules light and offers a cinematic style of play where the story comes first. The rules help keep the story moving forward and facilitate a fun investigative game.

As Reapers you are able to capture souls of the dead, and question them to gather evidence and clues normal detectives could never get their hands on. Alternatively, you can sell the souls to Agents of Heaven and Hell in order to gain supernatural powers that will help you survive the spiral of doom you will inevitably decent into. The game features over 10 supernatural powers for the players to gain, each one giving a new way of approaching investigation or dealing with any threats the players may face – whether they are mundane or supernatural.

Narrate your own solutions

Grim Noir features a unique new mechanic for earning Narrative Points from roleplaying your character in a film noir manner: by giving a Monologue to share the point of view of your character. You can then use your Narrative Points to alter the the game to your advantage by narrating Flashbacks and changing some details in the game scenes. This way you always have some control over your characters actions, without having to spend too much time planning every detail of the investigation.

Will you solve the mysteries of the City, or will you become one of the lost souls roaming it?