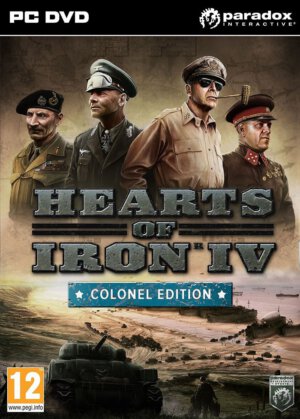 One of my favorite epic scale WWII series on PC has always been Hearts of Iron from Paradox Interactive and the newest edition is slated for a June 6th, 2016 release. In Hearts of Iron IV, you’ll be able to lead practically any historical nation of the period. Regardless if you take the reins of a major power embroiled in the global maelstrom or a small country simply aiming to survive intact, HOI IV allows you to re-fight (and even rewrite) history. Digitally, of course.

It’s also important to note this grand strategy series has always been exceptionally deep, yet sometimes a touch overwhelming for inexperienced players, so Paradox has indicated this latest incarnation will be easier for newcomers to grasp. The Hearts of Iron IV release also happens to coincide with the 72nd anniversary of the Allied landings on D-Day. You can preorder the game now (with additional DLC content included) and the title carries an MSRP ranging from $39.99 – 89.99 depending on your favor of extras.

Victory is at your fingertips! Your ability to lead your nation is your supreme weapon, the strategy game Hearts of Iron IV lets you take command of any nation in World War II; the most engaging conflict in world history. From the heart of the battlefield to the command center, you will guide your nation to glory and wage war, negotiate or invade. You hold the power to tip the very balance of WWII.  It is time to show your ability as the greatest military leader in the world. Will you relive or change history? Will you change the fate of the world by achieving victory at all costs?