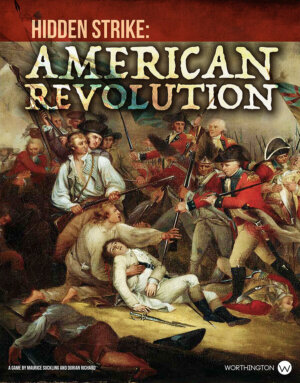 The latest wargame from Worthington Publishing is entering its final Kickstarter run. Hidden Strike: American Revolution, designed by Maurice Suckling and Dorian Richard, is a card driven game in which the players look to control the fledgling colonies in order to win the conflict. The game is for one to five players, ages 12+, and plays in around 60 to 120 minutes. The project is past 1500% funded and you can reserve a copy for a $69.00 pledge through October 10th. Expected delivery is March 2021.

Hidden Strike: American Revolution recreates the struggle between the American colonists and the British forces during the War of Independence. Each side tries to win the war by controlling a majority of regions.

Confronted by overwhelming forces, the colonists will need strategy to defeat the larger British army and navy to gain their Independence. This is a card driven game, where players manage their hand of cards, usually playing just one card a turn to allow them to move tokens representing military forces across the board into key spaces at key times.

The game can be played in five different modes: