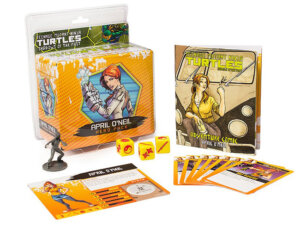 IDW Games has just revealed a small bit of info about an upcoming expansion for Teenage Mutant Ninja Turtles: Shadows of the Past. While there isn’t currently any sell sheet information about the April O’Neil Hero Pack, the company did tweet a photo of the contents. The core game has received good buzz and features forty miniatures for a pretty friendly MSRP of $89.99.

Obviously, the expansion includes the figure for one of the Turtles’ staunchest allies as well as custom dice and ability cards. No word yet on a release date or retail price though…

About the core game: 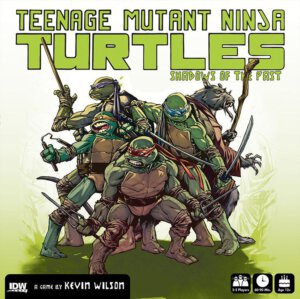 Teenage Mutant Ninja Turtles: Shadows of the Past is a miniatures combat, scenario-driven campaign game that features story content from the IDW TMNT comic. Taking the role of their favorite Turtle or the ultimate villain Shredder, players battle their way through a series of 60-90 minute missions in which they develop their characters’ strengths, fighting styles, and equipment along the way to create a lasting story arc. Fan-favorite characters like Casey Jones and Alopex appear throughout the missions as the Turtles call on their closest allies for help in battling their deadliest foes.